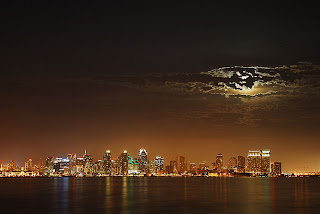 I’ve been to San Diego on several occasions since moving to California in 1997 and it’s a great city. I’ve seen the Padres play the Dodgers down in Petco Stadium, I’ve been to the NFL experience hosted at Qualicom one year. I’ve also been to the Zoo and Sea World. There’s so much to see and do there, you need two or three quality days to just hang out.

San Diego is the 2nd largest city in California and the 9th largest in the US. It’s population is over 1.2 million.

San Diego is the southern end of the El Camino Real, a trail the monks took which established missions along with the way. The mission in San Diego is called Mission San Diego de Alcalá. It was founded by Junipero Sierra in 1769. In 1976, Pope Paul VI had it declared a minor basilica. Over the centuries it’s seen its fair share of war. In 1860’s when it was returned to the Catholic Church, it was in ruins. Today it’s a landmark and a thriving parish.

THE MISSION IN SAN DIEGO 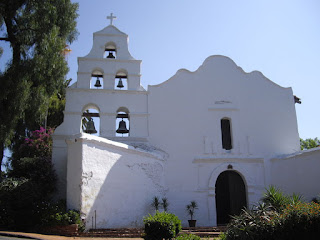 San Diego has a rich military history. San Diego is the site of one of the largest naval fleets in the world, and San Diego has become the largest concentration of Naval facilities in the world due to base reductions at Norfolk, Virginia and retrenchment of the Russian naval base in Vladivostok. Two of the U.S. Navy's Nimitz class supercarriers, (the USS Nimitz and the USS Ronald Reagan), five amphibious assault ships, several Los Angeles-class "fast attack" submarines, the Hospital Ship USNS Mercy, carrier and submarine tenders, destroyers, cruisers, frigates, and many smaller ships are home-ported there. Four Navy vessels have been named USS San Diego in honor of the city.

Currently, the USS Midway, a decommissioned air craft carrier that was last “in service” during the 1st Gulf War is down in San Diego. My husband and I are planning a trip down there in April to see it.

One of San Diego’s premium attractions is Sea World, home of Shamu the killer whale. There are plenty of ocean life exhibits in Sea World. Of course my favorite is Shamu, but I also like visiting the dolphins and penguins. They also have a Budweiser exhibit as well. Another attraction is the zoo. Some of China’s famous pandas stay at the San Diego zoo. 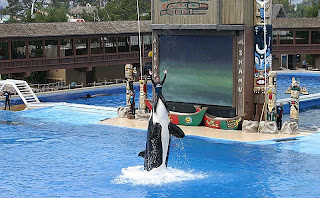 The downtown area has captured an old town feel with it’s use of gas lamps and it’s often called the Gas lamp district. San Diego is less than 20 minutes away from Mexico and Tijuana.

If you’ve gone to San Diego, I’d love to hear about your trip and what you enjoyed about the city. For me, San Diego is an hidden jewel on the California coast.