Excerpt Monday - Across The Fickle Winds of History 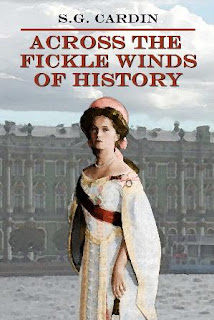 THE BLURB:
1913 brought the tercentenary to the Romanov Dynasty to Russia and the last glory days to Nicholas II and his family - but even as the Romanovs celebrated, the underpinnings of discontent and dissension began to make their way through Russian society.

It is in this world that Olga Nicolaievna Romanov finds herself coming of age. A young woman of seventeen, Olga and her sisters meet three strangers on the grounds of the Catherine Palace. Immediately, she's drawn to a handsome young man, Paul Kerensky. The girls take the strangers into their home - and hearts.

He was Russian! I swore to Tatiana I wanted no man unless he
shared my nationality. Could a man be so perfect?

You can buy Across The Fickle Winds of History at:
http://www.lulu.com/product/paperback/across-the-fickle-winds-of-history/1572128