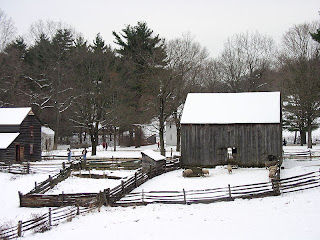 I remember my earliest visit to Old Sturbridge, I think I was in the 5th grade. I never forget this place. I next visited when I was in the Army, on leave in the late 1980's, early 1990's. I took my dh here shortly after I got married and shared this special with him.

So what is Old Sturbridge Village? It's a reenactment of a New England town from the 1830's located in Massachusetts. It is more than 200 acres. You can tour the entire town to see what life was like in early New England! The different shops are populated with actors who reenact characters from that time!

It's a great place to go and learn about colonial New England. For me, it was like stepping into history.
A Stagecoach 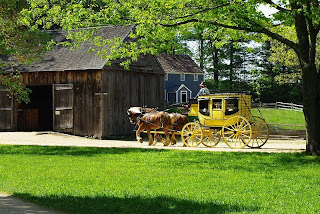 The Village opened on 8 June 1946. It was the dream of AB Wells and his son George. AB was an antique collector and had collected so many antiques he needed to find a place to do something with them. His son, George, suggested opening up a "living" history exhibit, hence the birth of OSV.

These are the following shops in OSV:

Old Sturbridge Village has over 40 structures, including restored buildings purchased and relocated from across New England and some authentic reconstructions.

The village is divided into three main sections. The Center Village represents the center of town, with the town green as its focal point. Countryside consists of outlying farms and shops. The Mill Neighborhood features various commercial structures that rely upon a millpond for their power.

Friends Meetinghouse - a meetinghouse of the Religious Society of Friends, also known as Quakers

Law Office - a small, free-standing office of a lawyer

Parsonage - the home of a Congregational minister and his family

Asa Knight Store - a country store, transported from its original location in Vermont.

Thompson Bank - a bank that was originally located in Thompson, CT 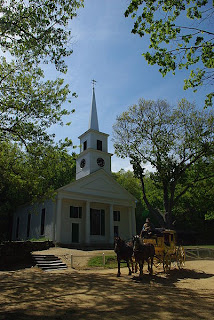 Shoe Shop - an historic ten footer, which was a small backyard shop structure built in the 18th and 19th centuries in New England to serve as a shoemaker's shop.

Small House - a small home based on those of less affluent families, people of color, newlyweds, and renters

The Stage Coach - On May 23, 2008, a stage coach marked "Hartford & Worcester" started making trips through Center Village. Guests can ride in the stagecoach for $3.00 per rider.


Info for this blog entry came from:
http://en.wikipedia.org/wiki/Old_Sturbridge_Village
Posted by Stephanie Burkhart at 5:26 PM