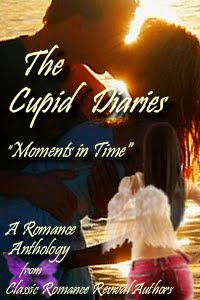 Here's an excerpt of a short story I submitted to CRR's "The Cupid Diaries." The story is Royal Pretender and it is about how George II of England met his wife. The Cupid Diaries is coming soon from CRR.

Caroline Wilhelmina, Princess of Ansbach, stared listlessly out of the window of her apartments and watched as a strange, yet royal carriage slowly approached. She was mildly curious. They rarely received visitors in small Ansbach and not at the summer residence where it was barely staffed.

Caroline sighed and ran a hand through her fine, blonde hair. If only she weren’t so melancholy over losing her mother figure, Sophia Charlotte. Her own mother had died when she was eleven and Sophia Charlotte had raised her until her own death a couple of months ago. She missed Berlin, Sophia Charlotte’s court, Leibniz, the great court recorder, and the gaiety Sophia Charlotte brought to her life. Caroline left Berlin in sadness after her death to join her brother in Ansbach, but nothing seemed to help her mood. Even taking a short holiday at Triesdorf with her brother made her long for happier times.

She noticed the carriage stop. Two men and a valet got out. Noblemen? One was old, and one was…very young. Her inquisitive eyes came to rest on the young nobleman. How confident he must be in himself that he didn’t wear a wig. She liked that about a man. He was a little short, her height, she guessed, still, that didn’t deter her from staring at him. His neat, tapered haircut and his immaculate clothes caught her attention. He took pride in himself and his appearance. Soft shaped almond eyes spoke of his kindness. His cheeks were full of color and his lively expression hinted at his vitality. Even his lips seemed full and pouty. Lips fine enough to kiss. Caroline felt her heart flutter as she realized he was a very good-looking young man.

Get hold of yourself, Caroline!

She reached out and put her hand on her window sill to brace her now unsteady feet.

From her spot, she saw her brother go out to meet the travelers. They talked for several minutes and the men followed her brother inside. Nervous trepidation filled her. Did William seriously expect to entertain? Their staff consisted only of a butler, maid, and cook here at the summer residence!

She walked over to her washbasin and filled a bowl with water, washing her face. Within minutes there was a knock at the door.