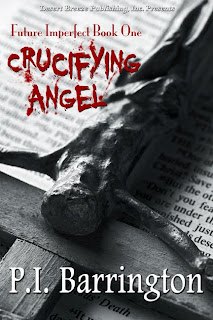 Patti's novel, "Crucifying Angel," is going to be released with Desert Breeze Publishing on 1 NOV. Here's an excerpt.
******
BLURB:
A serial killer with an unholy mission is unleashed on deteriorating sin city Las Vegas and LVPD Homicide Detectives Payce Halligan and her new partner, British ex-Deputy Chief Inspector begin a deadly cat and mouse game as each must deal with their own traumatic past and their evolving attraction.
***
The next tableau of death also sat eight stories up in another iron skeleton that was once a casino in utero. Again, the body of the victim hung upside down, crucified from two iron girders crossed into an X, the victim's ankles pierced and wired to the two top opposing ends of beams and body slashed in the identical locations. White linen cloths draped the body, reminiscent of Roman togas, did nothing to hide degrading posture or the disrespect of the murderer, nor the fact that the desecrated body could be seen from the Strip below by pedestrians and passengers alike. Their curiosity peaked by the obvious attempt at hiding the crime scene with yellow police tarps that only made the scene more visible.
Gavin walked to the edge of the scaffold, gazing at the vistas of Las Vegas, trying to take in the wide, unending expanse of desert and make sense of the bizarre methods of death. Was there some message in the patterns known only to the killer and mattering only to him? Was there something he wanted to authorities to take notice of, something he was telling them? Or was it just the death-addicted actions of a homicide junkie?
This was the place for it. Las Vegas, sin city from its inception, was hot as hell literally and figuratively, was as barren and painfully garish and distorted as any lower floor of Hades. Even the populace on the streets below looked and lived like lost denizens of the Underworld.
The Underworld! Gavin, like any other citizen of Earth, knew about the Mafia underworld and its underpinning of Las Vegas. It was the mob, specifically in the form of Bugsy Siegel, who conceived and gave birth to the free sin capitol of the United States, who nurtured it and encouraged its licentiousness, its slavering over the outrageous amounts of money that was the lifeblood of this uniquely evil city.
He shook his head slightly, folding his arms over his chest. Was the city really evil or was it just an enabler of devilry? Did it matter? Murder was murder whether it occurred in the suburbs of cold rainy London or here in the desert hell of Nevada, USA.
The soapy sweet scent of Payce's hair as she moved past him jerked him back from the philosophical to the real world.
"Hey, wake up, McAllister," she said, glancing over the scene one last time. "Anything else?"

"Um-- no. I think we're done here." He moved to stand beside her as the working elevator lift creaked upwards toward them.

*******
Crucifying Angel will be available on 1 NOV 09. From Desert Breeze Publishing. Here's a link:
http://stores.desertbreezepublishing.com/-strse-44/%3Ci%3EFuture-Imperfect-Book-One-cln-%3C-fdsh-i%3E/Detail.bok
Posted by Stephanie Burkhart at 9:30 PM