Well, I'm taking the plunge and participating the National Novel Writing Month this year. This is my first time, so I'm a little nervous and anxious, but I'm also excited as well. The project I'll be "noveling" about is called, "The Count's Lair." This is a paranormal romance and it's book 2 in my "Hungarian Moon" series.

Here's the blub:
Can a man haunted by an ancient curse fall in love? That’s what Count Anton Varga dares to explore when he meets beautiful and talented Lady Amelia Andrássy. Anton rediscovers Amelia in Vienna, Austria-Hungary, giving a concert and he hungers to pursue her, only he has a secret which he fears she will not accept. With the help and support of his friend and servant, Georg, Anton decides to win Amelia’s heart. Will the journey bring him the love he’s hungered for, or will it tear his heart apart? 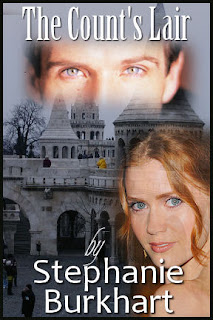 I first heard of NaNoWriMo when I signed up on Writing.com. At first I thought it was an ambitious goal, and I still do. Trying to get 50,000 words in month will be a challenge for me considering my other commitments - real life, my kids, my job... but writing is a passion for me and I'm really into Anton & Amelia's story so I'm looking forward to this. I haven't wanted to tackle a writing project for NaNoWriMo until now. I figure it will help motivate me to get a good chunk of the writing done.

NaNoWriMo supports young writers and they ask if you're willing to be sponsored, which I am. My goal is ambitious for me - $200.00. I hope to make it, but I know that it might be challenging given today's economic climate. As per their current stat, only 3.71 of those sponsored have earned over $81,000 which I think is great. If anyone would like to sponsor me, let me know. Send me an email and I'll send you a link.

For NaNoWriMo, it's not the quality of work - it's the quanity. Put it down on your writing program and don't worry about editing it until December. NaNoWriMo will give you the skelton of a novel, you fill in the rest later.

Their website offers a lot of support. If you want to check out my home on NaNoWriMo, become a writing buddy, or just say "Hi." You can find me here at: http://www.nanowrimo.org/eng/user/526402

It's all about the written word.
Steph
Posted by Stephanie Burkhart at 4:54 AM