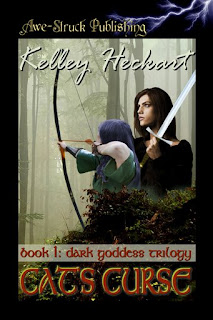 Blurb: Cardea is cursed to live an eternity as a blood drinker.

Aedan mac Gabrain, prince of Dal Riata, trusts no one after suffering a curse that keeps him from touching any females.

Can two tortured souls find love while battling a dark goddess determined to destroy them?

Cat's Curse is a Celtic historical romance with fantasy elements. This is the first book in a trilogy titled Dark Goddess. This series revolves around the entangled destinies of an Irish clan and an ancient Fae/Goddess. Cat's Curse is my first book featuring a vampire-like character, though she differs from a European vampire because she was cursed by her enemies to live an eternity as a Lamia (Greek vampire), half-woman, half-serpent. This is also my first book based on an actual person in history. My hero, Aedan mac Gabrain did exist in sixth century Scotland. He is mentioned in various texts from Adomnan's Life of St. Columba and in the Welsh poems, he is called Aedan the Treacherous. He was a formidable king feared by his enemies, but his younger years were shadowy and he may have fathered a king of the Picts. This fascinated me and I imagined what his earlier years might have been like and what kind of woman he would be drawn to.
I came up with the idea for this trilogy when I was researching the Picts. I came across this Irish king named Aedan mac Gabrain who had a shadowy past and fought the Picts for many years. He fascinated me because he was a contemporary of kings like Urien of Rheged, the Briton King Riderch of Strathclyde and a close friend of St. Columba, but not much was known about him other than he was considered one of the most feared warlords of his time.

4 cards! Ms. Heckart has written an entertaining tale that combines both history and fantasy in a way that will enchant the reader. Definitely put this one in your “I’m gonna read it next” pile! Reviewed by Rie McGaha of Book Reviews by Rie McGaha
Link to full review: http://thepaganandthepen.wordpress.com/2009/06/26/book-review-cats-curse-by-kelly-heckart/

4 Cups! Cat’s Curse is a wonderful story full of spells, trust, betrayal, and for the two, unconditional love. I love how the subplots built up the main story. Every character is developed. The dialogue and action keeps the book fast paced…The action blends into the story and love scenes are sensuous instead of graphic, along with being very compelling. This well thought out story is a very easy to recommend historical. I look forward to more of this trilogy. Anya Reviewer for Coffee Time Romance & More
http://www.coffeetimeromance.com/BookReviews/catscursebookone.html

Kelley's website: www.kelleyheckart.com
Posted by Stephanie Burkhart at 7:27 AM