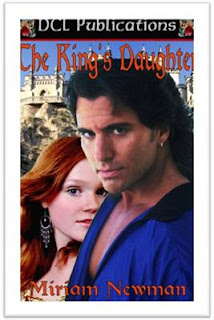 Welcome guest author, Miriam Newman. She's here to talk about her book, "The King's Daughter!
Steph
****
Born to a dying mother and an ambitious king, Tarabenthia is the last heir to the crown of Alcinia. Yet when the idyll of her childhood ends, she will defy her father for the sake of love, tipping the balance in a world poised on the brink of war and leaving history to judge whether she is heroine or harlot. She will love a famous general, a Northern prince and a man who arrives on her shores with only the clothes on his back. And, always, love of her land and the Goddess she worships will rule her life.
The Story Behind the Book

The King’s Daughter was written on yellow legal pads in a variety of places in Ireland: hotel rooms, pubs, sheep pastures and the ruins of the Rock of Cashel. Widowed, on the run from memories and short of funds, I didn’t have a lap top—yet. That would have to await my return to the U.S.

For many years, I had written poetry, most of it fueled by Irish myths and legends. But I had never been to Ireland. Most of my poems sprang from my reading and stories from a Scotch-Irish grandmother who told me I was fey. Oh, yes, and there’s the part where my mother read me Longfellow’s “A Skeleton in Armor” instead of nursery rhymes, thereby instilling in me a love of men in chain mail.

I had my own knight in shining armor for all too few years. When he died, instead of doing the expected thing, I ran away. To Ireland. To a place I had never seen, to people I had never met and the book that had been there, waiting for me.

Part II of The Chronicles of Alcinia – Heart of the Earth – is available at the above locations.

Trailer: www.youtube.com/watch?v=BnoRJ2i98HI
Posted by Stephanie Burkhart at 2:27 AM