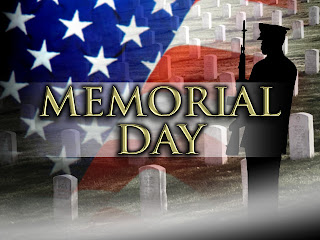 Memorial Day is a holiday close to my heart. I served in the military from 1986-1997. Military life is not easy. For those who serve and and are veterans, thank you for giving a part of yourself to our nation.

Memorial Day was originally called "Decoration Day," and was established as a day of rememberance for those who died in service to the U.S. Nation during the Civil War. It was first proclaimed on 5 May 1868 in Waterloo, NY. (Now, I have conflicting reports on the date, also given as 1866, most sources I've found, however, give the 1868 date.)

The south refused to recoginze it until World War I. In 1915, Moina Michael wrote a poem called "In Flander's Field" which inspired the idea of wearing red poppies on Memorial Day to honor those who died during "The Great War."

In 1971, Congress passed the Holiday Act moving Memorial Day from it's traditional observance of 30 May to the last Monday in May to make it a three day holiday weekend.

I saw them first
when I was six,
marching in the parade,
with faded uniforms,
and frayed ribbons.
Their smiles full of remembrances
I knew nothing of.

I saw them again
when I was sixteen,
Older, weathered,
wizened, tempered.
This time their smiles hinted at
proud memories I could have, too.

I saw them next
when I was twenty-one.
I marched with them,
my uniform sharp and pressed,
medals glistening in the sun.
My hand gone.

Memories haunted, hinting of times seen,
full of destruction and despair,
from scenes of war we share.
Posted by Stephanie Burkhart at 7:20 AM