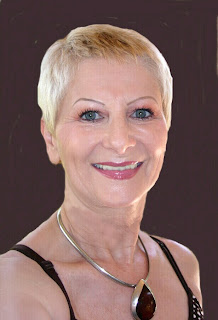 Vijaya is a fellow Desert Breeze Author and writes about people and cats in THE CHRONICLES OF KASSOUK.

Thank you, Stephanie, for having me on your blog to talk about my new series, The Chronicles of Kassouk. For this particular world, I used my love of felines and created a world where large felines have become pets, and are trained for warfare.

The people of Kassouk are the descendants of a Human expedition named Noah's Ark, who crashed on this winter planet centuries ago. Having lost all technology in their fight for survival, they are now a flourishing medieval society exploited by Aliens, with the help of their hybrid children called Mutants.

"... an exceptional tale that belongs in a place of honor on keeper shelves everywhere." Coffee Time Romance - 5 cups rating.
In a winter world where blood and loyalty are everything, how can Tora avenge her father’s death when a handsome Mutant challenges her bloodline, and his offer to help can get them both killed... Dragomir offers to help, but Humans and Mutants are forbidden to fraternize under penalty of death... Should Tora trust her mind, her instincts, or her heart?

In the vortex of war, treason and intrigue, among blizzards, avalanches and ambushes, will Tora solve the mystery of her father’s death and unveil the secret of her birth? Can she and Dragomir escape persecutions long enough to save their planet from the invaders and fulfill their destiny?

"...another good read in this fantasy romance series... packed with action and adventure. Galya ... a tough warrior... a sweetness about her that makes her easy to like... I loved how Rascal was Terek's faithful companion and defender throughout nearly the entire story... I really liked Red Leopard." 4.5 stars - The Hope Chest Reviews 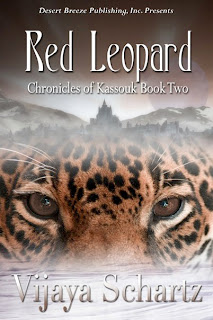 In charge of the fortress of Kassouk in the King's absence, what is Terek to do when a Goddian spacecraft lands in his medieval backyard, and the striking woman leading the galactic party insists on colonization?

Galya, the Goddian Princess commanding the geological vessel, is bent on finding a crystal with unusual hyperconductor properties. And the futile resistance of the local population isn’t going to stop her. Not even that defiant tribal chief nicknamed Red Leopard, like the infernal feline that follows him everywhere.

Terek and his band of swordsmen and felines must defend their people’s freedom, no matter the cost. But with this unexpected arrival, an old prophecy surfaces, taking new meaning and carrying a new threat...


When political intrigues, greed, murder and betrayal tip the scales, whom can Galya really trust? Her fellow Goddians? the Mutants bred to serve her race? or her primitive Human enemy?

The tall woman had ivory skin, full pink lips, short flaxen hair and deep blue eyes enhanced by curved blue lines tattooed around them. “And what about your sword, Red Leopard, is it?”

A Gray took a step toward Terek.

The woman raised one hand to stop him. She had six fingers, like a Mutant or a Godd. “I’ll handle this.” She stared into Terek’s eyes. She looked Human, taller than him, and extremely refined. “What are your intentions, Red Leopard?”

“How do you know my name?” Terek’s heart beat like a battle drum.

She had a sad smile. “The same way I knew you were coming. You were betrayed.”

Terek bristled at the idea that someone had intentionally sent a hundred Humans and a dozen felines to certain death. “Who is the traitor?”

“It’s not important.” The woman moved with natural grace, the pale blue silk floating around her shapely hips and slim thighs with each step. “I’m Galya.”

The name told him nothing. She exhibited no fear as she approached him, although he still held his sword at the ready, and she wore no armor that he could see. If she came any closer, he would…what? Kill her? The Grays would retaliate and massacre his warriors.

Struggling to ignore the way his body flushed in her proximity, Terek stared back at Galya. “I hope in all fairness that you will spare my fighters. I take full responsibility for the attack. But I would rather die than surrender myself.”

“I like your style, Red Leopard.” The shadow of a smile played on the woman’s lips and she patted the exquisite white scabbard hanging from her silver sash. “I need field practice, and you seem like a worthy opponent.”

She stepped out of her high platform shoes. A general gasp filled the room. She now stood at eye level with Terek. Could she be Human? No. She had six lovely toes.

Terek couldn’t imagine grappling with her in single combat. Or rather, he could. An intimate battle. He felt himself blush at the lusty thought and caught amusement in Galya’s blue eyes. Despite her pale looks and cool demeanor, he sensed in her a smoldering passion.

She unsheathed a pristine silvery blade that shimmered in the artificial light. “You fight me, and I’ll decide whether to spare your warriors or execute you all for treason.”

I can only tell you that Black Jaguar is the son of Terek and Galya from Book Two, that the daughter of Tora and Dragomir from Book One plays an important role. As for the heroine of Black Jaguar, she is a mind reader, and the story is one of exploration.

Check my contest page to win my books, click on CONTEST on the left at: http://www.vijayaschartz.com