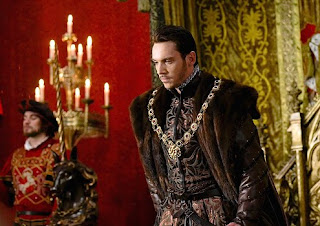 Welcome to Part III in my Henry VII Syphilis Series - Today we'll take a look at Henry's children and how they suffered with congential syphilis.

FIRST THOUGH: I'd like to congratulate Jennifer Shirk for signing up to follow me. She won a $6.00 GC for Desert Breeze Publishing. Jennifer contact me at sgcardin1@yahoo.com or botrina_buchanan@yahoo.com with your information so I can get that GC out to you.

During the king’s sexual relations with Anne, it was reported by her that Henry, on occasion, had a hard time sustaining an erection. In fact, Henry had been married to Jane Seymour for seven months before Jane conceived a child. While sources at the time can’t confirm Henry might be going impotent, I suggest this is strong circumstantial evidence he was. After all, we knew he was very virile. Katherine and Anne got pregnant by him almost immediately after consummating their physical relations with him. Also, while Jane Seymour died in childbirth, Edward, Henry’s son by her, was the last known child from Henry VIII. Henry did not get Anne of Cleaves pregnant in their brief marriage. Anne was reported telling one of her ladies that while he was on top, he tried and tried, but could not sustain an erection. In Henry’s next marriage to Katherine Howard, it was reported that due to his weight, she had to get on top of him. Katherine was documented often complaining that Henry could not sustain an erection. As for Henry’s last wife, Katherine Parr, while unconfirmed, I doubt they attempted sexual intercourse. Parr outlived Henry and entered into a marriage with Thomas Seymour, Jane’s brother. Parr gave birth to a healthy girl who never showed any signs of congenital syphilis.

The interesting question history now poses is this: Did Edward VI suffer from congenital syphilis?

It is interesting to note that during Jane Seymour’s pregnancy, Henry developed a strange lesion on the side of his nose, a further tell-tale symptom of tertiary syphilis and secondary symptoms. Also, during this time, Henry started to go prematurely gray and grow fat. Within four years, his doublet would have expanded to fit 3 of the biggest men of the time.

Jane Seymour suffered a hard, three day labor. Reports as to her son’s health were mixed. As for Jane, the childbirth was excruciating. Given the documented evidence that exists, there was probably a tear in her perineum which got infected and this infection developed into perpetual fever which killed her. She did not die from symptoms of syphilis. Ironically, Henry had ordered clean sheets and the finest linens for his son, while Jane recovered in dirty and unsanitary conditions. If he had ordered the clean sheets and hygienic conditions for her, she might have lived.

History is inconsistent as to Prince Edward’s health in his early years. One source documents he had a healthy, lusty cry, while the other states, “he was never a robust child.”

Circumstantial evidence leans toward Edward having congenital syphilis. After all, his sister, Mary, suffered from it and she was now 20. Henry and Jane had unprotected sex for seven months before she conceived. Remember that lesion he developed on his face? His secondary symptoms were active. I assert that Henry had an open sore while his secondary symptoms of syphilis were flaring up and he gave Jane syphilis.

Weir writes that Edward thrived under the care of a wet nurse. Henry imposed high standards of hygiene regarding his son, yet Edward did have reported problems teething. This would be a symptom of congenital syphilis. When Edward was four it was reported he had a bad fever. He was occasionally ill in childhood and suffered from poor eyesight, but enjoyed good health until the last six months of his life. Again, a child with congenital syphilis could display all of this and be considered “healthy.” Mary Tudor’s own health demonstrated this.

In 1546, Henry VIII was 54 years old. He could barely walk and became absentminded. When he finally died, the stench of his bursting leg ulcers consumed the room.

Interestingly, the king’s doctors never thought for one minute he suffered from syphilis.

When Henry died, his 9 year old son came to the throne under a regency due to his age. Edward VI died when he was 15. The general consensus of the medical doctors was consumption, and while it was probable Edward did suffer and die from this, most of the symptoms given for his poor health in the last six months of his life are consistent with congenital syphilis. Edward was now a teenager and exhibiting signs of the tertiary phase. His symptoms included hair loss, the loss of his nails, swollen legs and arms, flu-like symptoms, chronic coughing (possibly due to the consumption) and rash-like bed sores. It was noted that he ejected a greenish-yellow, black and pinkish matter from his mouth which would support a diagnosis of consumption. However, I assert that the totality of symptoms also indicate Edward had congenital syphilis and tertiary stage symptoms which contributed to his death.

Edward died in July 1553. Mary came to the throne in her own right. She was 37. Almost immediately, Mary went about finding a husband. She married the Spanish prince, Phillip in July 1554. While it was known that Phillip didn’t care for his wife, I do believe they did have sexual relations. Mary reported she was pregnant in November 1554, however, she would have the same problems regarding her pregnancies that her mother had, especially if she suffered from congenital syphilis. Doctors from Mary’s time document her child bearing problems as “phantom pregnancies.” Basically, that she was so desirous to be pregnant, she thought she was when she wasn’t. What makes more sense is that Mary, if she was pregnant, would have difficulty carrying to term because of the congenital syphilis. But, was congenital syphilis the cause of her “phantom” pregnancies?

What we do know is this: throughout her life, Mary was in poor health. She had problems with her eyesight, headaches, and infrequent menstruation. During her first reported pregnancy, doctors did document symptoms of pregnancy including an enlarging belly and lactation. What most likely happened was a pregnancy that she miscarried without realizing it. This would be very probably considering the condition she had. After a while, her symptoms went away and nobody talked about it to Queen. In February 1558, Mary thought she was pregnant again, but doctors thought his was another phantom pregnancy. Again, she had symptoms of pregnancy that went away. What I believe at this time is that Mary probably suffered from reproductive problems, possibility cysts, fibroids, and even ovarian/cervical cancer, giving the confusing range of symptoms the doctors reported. As her symptoms from the pregnancy faded, her health took a turn for the worst. As an interesting note, it was reported Phillip found sex with Mary intolerable, complaining of a gynecological condition.

Elizabeth, Henry’s daughter with Anne Boleyn, was not reported to have any symptoms of congenital syphilis. She lived to be a ripe old age of 68 (considered a ripe old age for the times).

I would assert that if Elizabeth had married and had children, they would have been free of the taint of syphilis.

It is ironic that Henry’s greatest prize, Edward VI, would die such a painful death, so early in life and his greatest shame, Elizabeth, would be remembered for her successful reign. It is also ironic that Henry’s shameful behavior toward his daughter, coupled with Thomas Seymour’s amorous advances toward Elizabeth while her stepmother, Katherine Parr, was pregnant with Seymour’s child, soured her on the idea of marriage and having children herself. If she had a child, I would assert that it would have had a lusty cry, free of the taint of syphilis and it would have carried the Tudor dynasty forward into the next century.

Henry’s promiscuous behavior led to him contracting syphilis and giving it to his wives. This active strand of syphilis made it near impossible for him to have an heir – be it a girl or a boy. Mary and Edward died, having been haunted by congenital syphilis all their lives, and Elizabeth, who could have carried on the Tudor dynasty, had no desire to get married and have children. She simply did not want to have herself subjected to a man’s will after experiencing her father’s.

Henry will always be remembered as a charismatic, dashing young man, and an old, fat king. The hallmark of his reign brought about the downfall of the Catholic Church in England, but he will forever be remembered for his six wives – wives who tried to please him but were doomed to fail due to the syphilis which haunted him practically all his life.