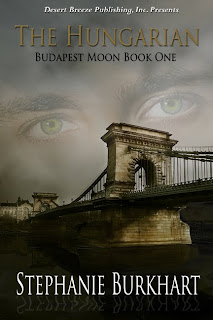 Hungary:
Months ago Count Mathias Duma and his English born wife were attacked by wolves. His wife was killed. Mathias was bitten and turned into a werewolf.

England:
Katherine’s favorite book in her uncle’s library was Destiny and Astrology. She had just curled up with the book when in walked a Count Duma. There was an instant attraction between the two. Katherine was the first woman to stir the Count’s heart since the death of his wife. He had mourned her for months. He longed to return to his home land of Romania but his former mother in law was trying to make that impossible. She was trying to take his daughter away from him. He had recently purchased an estate in the area so that his daughter would also know she had a connection to her mother’s home land.

Eventually Kate and Mathias were able to return to his home in Hungary. His rival Count Vargar was determined to steal Katherine away from him. Mathias demanded total loyalty. Filled with jealousy and rage he accused Katherine of being disloyal.

This book is extremely entertaining. The plot is sensual and romantic. Katherine and Mathias play were together. This is the first book in a new series. I look forward to reading the next entry.

A fantastic story. Stephanie's writing is superb in this paranormal romance. The Hungarian is rich with sharp, intelligent, likable characters that make the reader love them and root for them and cry for them along the way. Count Matthias Duma is dealing with the fallout of the tragic, somewhat mysterious death of his first wife. Suspicious of his involvement in her daughter's death, Matthias's mother-in-law has made it her mission to smear his name and prove him an unfit parent to her only grandchild, Matthias's daughter, Emily. An ugly custody battle has forced Matthias to leave his home in Hungary and establish a temporary residence in London for the duration of the investigation and proceedings. While there, he meets Lady Katherine Archibald, the modest, beautiful, vibrant young niece of a close friend and business associate. From the moment of their fateful meeting, she brings sunshine and optimism into his lonely, brooding life, along with hope for a future of new love and salvation from the dark cloud of his tragic past. While their romance blossoms over a summer-long courtship, it also stirs whispers and condemning gossip that threatens to ruin his chances of winning his custody suit.

And then there's another hairy situation to contend with - literally. What would his mother-in-law and Katherine think if they found out the truth behind his reason for loathing the moon...

Stephanie takes us on this emotional ride with grace and eloquence. She brings history to life, from noble life in Victorian Era England, to the mystic, rural countryside of Hungary. She takes you on location with vivid descriptions that bring the sights, sounds, and smells to life. Their period clothing unfold before our eyes. The descriptions of the smells of the spices and foods make the mouth water. Few authors can bring such detail to their writing without burdening and cluttering the pages, yet Stephanie does so with seamless, easy beauty. By the time Katherine discovers Matthias's secret, Stephanie has us thoroughly invested in this endearing, page-turning tale of werewolves, witches, friends, and enemies, all striving and driving for one end -- happily-ever-after. This is a must-read for anyone who loves a good love-story with a twist. You won't be disappointed.
Posted by Stephanie Burkhart at 7:15 AM