Book Review Friday - Pillars of the Earth by Ken Follett 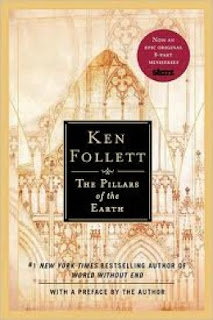 "Pillars of the Earth" is full of greed, ambition, betrayal, loyalty, and love. Set in the 1100's England during the troubled times of Stephen and Maud, their clash for the crown challenges the lives of the lower classes in unforeseen ways.

The story takes places over several decades. The novel opens with a woman cursing a knight, a monk, and a priest at the hanging of an innocent man, raising the reader's curiosity immediately. From there, the reader meets Tom Builder who is fired from a project. With no money, he can't support his family. His wife dies in childbirth and Tom abandons the child. Feeling bad, he goes to recover the baby only to find out the monks found him and are willing to raise it.

Prior Phillip takes over the crumbling Kingsbridge Cathedral and faces many obstacles. Percy Hamleigh, the local landowner, learns the local Earl is plotting against the king. His son, William, brings the traitor to light and eventually the Hamleighs are rewarded. Aliena, the Earl's daughter, fights with passion to obtain the castle stolen from her. Follet masterfully weaves the lives of Tom, Phillip, Percy, William and Aliena together against a backdrop of greed, war, betrayal and secrets. Will truth and love prove to be the pillars of the Earth that overcome the darkness of the soul? 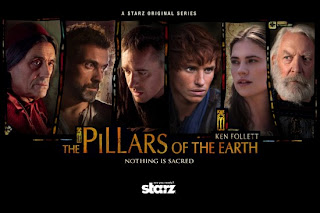 Follett's writing style is a bit stilted at times, but as the story progresses, I became used to it. The plot is slow, but I learned that every event is succinctly linked to the last and there were times I had to really think about what had happened. In that regard, I really enjoyed how the book made me consider the plot and characters.

The characters were not only interesting, but compelling. Even the monks, who are men of God, have human failings. These characters will make the reader cry, laugh, smile and cuss.

Follett is a superb storyteller. Pillars of the Earth is an epic historical fiction that takes the reader to another time and place with ease. There's plenty of action, suspense, adventure and romance. The novel taps into primal, core emotions and will resonate long after the last page. While the novel took me several months to read, it was worth it. If you're a fan of historical fiction, I'd give Pillars of the Earth a try.