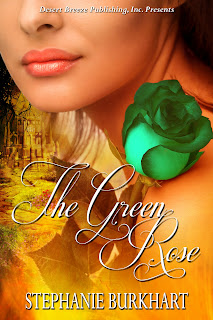 BLURB FOR THE GREEN ROSE: Fantasy Romance
Eight hundred years ago on the continent of Gaia, war rocked the countries of N'Gasse, Tapin, Daháka, and Ravenrock. The fearsome wyldebeasts of the black east threatened to destroy the known world. King Xeres of Daháka gathered the most powerful magicians of Gaia along with Queen Rhysia of N'Gasse, King Erik of Ravenrock, and Nyla, the High Priestess of Tapin at Komodo Field.

Daháka brought pollen taken from the bees of the Tagrassé Forest. N'Gasse brought sap from the old mahogany trees. Tapin presented dust from falcon eggs. Ravenrock offered a rose. Together, they forged the indestructible green rose, a harbinger of powerful magic.

Using the green rose, the nobles and peoples of Gaia fought the wyldebeasts, led by the dark wizard, Augustin. Once the evil threat was defeated, the Eastern Wall was built along Ravenrock's borders to keep the foul wyldebeasts out of Gaia. Ravenrock was given the responsibility of guarding the 50,000 kilometer granite barrier.

King Xeres feared those who harbored evil in their hearts would seek the green rose. He tasked three witches to guard the flower and sent them into the heart of Tagrassé Forest.

Now, hundreds of years later, the peace of Gaia is once again threatened.

Ivánstan stood behind her, pressing the firm muscles of his chest against her back. He wrapped his arms around her waist and placed both his hands over hers. His warm breath caressed her ear and her body tingled from their contact. Despite her unease, she felt protected in his arms.

"You're tense. It's understandable, but I need you to relax -- to trust me." His voice was low and seductive. Sonia nipped at her lower lip with her teeth. How could she relax when the physical presence of him drove her senses to distraction?

"Clear your mind. Think of your father. Recall a happy memory of him. That's it -- he's smiling at you, pride on his face."

"You can see my memory?" she whispered.

Sonia drew in a breath and brought her father to mind -- the sound of his voice, deep and commanding, his face, rugged and lined, his scent, currants and earthy, his touch, gentle, yet firm. A vision of him appeared in her mind, but it was blurry and dark. Her father's tunic was torn, and he had been stripped of his weapons. The coppery scent of blood lingered over him.

Fear ripped through her and then the vision was gone. She grew limp, but Ivánstan tightened his grip. "He is not dead, but wounded and in a dark place."

"Thank Nyla," she whispered. "Is there more? Can we try again?"

"Not now. Your body is exhausted and needs rest. Tomorrow morning we can try to connect with your mother. The calling should be easier." His lips brushed against her ear, sending a warm pulse of physical awareness through her. Ivánstan was all male. Slowly, she turned around in his arms to gaze into his eyes. They were soft now, the orange reminding her of the sun; his pupils, while still slitted, were narrow.

5 Stars, Scorching Book Reviews
I don't read much romantic fantasy, but this was so well structured and so lovely, I could not put it down.

Stephenia Mcgee, Author "A Legacy of Lies"
Stephanie Burkhart weaves a delightful blend of action, intrigue and adventure into her fantasy romance, The Green Rose.

Regina Andrews, Author of "Destiny's Designs"
"The Green Rose" reaches the reader on an emotional level that rings very true and very sincere.

5 Stars, Amazon Reader, Sherry Chancellor
I've read a lot of Ms. Burkhart's books and this one is right up there at the top of my list. She nails the medieval time period and her characters are well-rounded and their conflicts are really well done.

5 Stars, Tami Dee, Author of "The Mists of Time" Series
Fantasy lovers will devour this story, and for those who have yet to try a fantasy romance; this is a story that will draw you into the realm and have you searching for more.

5 Stars, Joy Cagil, Amazon Reader
Even if you are not a reader of romance, fantasy, and action/adventure stories, Stephanie Burkhart's incredible skill will keep you engaged and deeply interested. Give it a try; I recommend it.

5 Stars, Sue Perkins, Author of "Dragon Flame"
Like fantasy and magic? Then The Green Rose is a must for you.


The Green Rose is available as an ebook only.
BUY LINKS:

Posted by Stephanie Burkhart at 7:20 AM