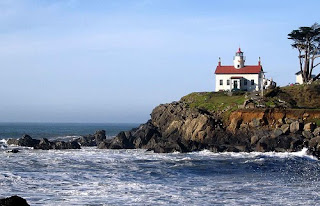 I love exploring California's lighthouses – even if I haven't had a chance to visit one yet. ☺. I've discovered that a majority of lighthouses are in the San Francisco area, so for this adventure, I opted to visit Battery Point, in Crescent City, CA.

Crescent City is just a couple of miles south of the Oregon border. Sound familiar? When the recent 2011 Japanese Tsunami hit, Crescent City was struck with higher than normal waves that ripped out docks and swept a photographer out to sea.

For me, the most interesting part about a lighthouse is the history and Battery Point has several stories in it's past. In 1855, the ship, America, burned in the Crescent City harbor. 3 cannons were recovered and mounted on the northern entrance. The cannons were used in Crescent City's 4th of July celebration, earning the name Battery Point.

In May 1855, Congress set aside 15,000 dollars for the construction of the Battery Point lighthouse. It was built on a tiny islet connected to Battery Point by an isthmus at low tide. Due to the location, the lighthouse can only be accessed at low tide. 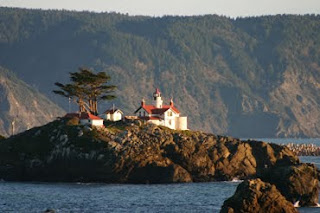 The lighthouse opened with a 4th order Fresnel Lens. (A Fresnel lens allows the construction of lenses of large aperture and short focal length without the mass and volume of material that would be required by a lens of conventional design. Compared to conventional bulky lenses, the Fresnel lens is much thinner, larger, and flatter, and captures more oblique light from a light source, thus allowing lighthouses to be visible over much greater distances.)

The first lighthouse keeper was Theophilis Magruder. His starting pay was $1,000, but when he received a 40% pay cut he resigned. (Author's Note: I'd quit too if I had a 40% pay cut!)

In March 1964, a 9.2 magnitude earthquake struck in Alaska, triggering a tsunami. Waves raced southward, hitting up to 20 feet in Crescent City. Incredibly, the lighthouse received no damaged, but Crescent City suffered the most damage on the Pacific Coast.

Watch where you step! The lighthouse has a ghost that haunts the halls.

Interesting side note: Battery Point is the setting for 2 novels: "Walk Across the Sea," by Susan Fletcher, a historical YA fiction, and "The Lightkeeper's Daughter," by Colleen Coble, a 2010 inspirational romance. 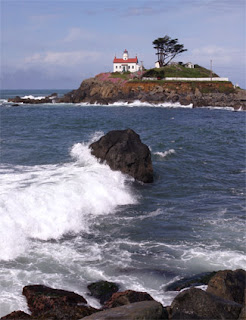 
References for this blog: