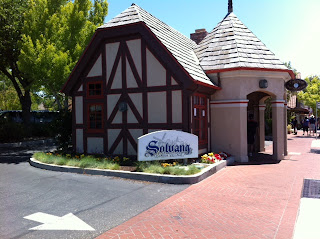 About 2 hours north of where I live is Solvang, CA, a town in the heart of the Santa Ynez Valley. For those who enjoy California wine, The Santa Ynez Valley is home to several fine wineries including Alexander and Wayne and Blackjack. (seen in the movie "Sideways.")

I love to visit Solvang for several reasons. In fact, these last couple of years, it's been a rare opportunity to have a night with my husband. We usually like to go around my birthday which falls around the first weekend of June.

Solvang is a town that captures Danish ambience with replicated facades, Danish cooking, and old-fashioned charm. For me, personally, its strikes a romantic chord in my heart. My husband and I were married in the Danish city of Nykobig, Denmark in 1991. And while Nykobig and Solvang are miles apart, both have an ambience that endears itself to us. 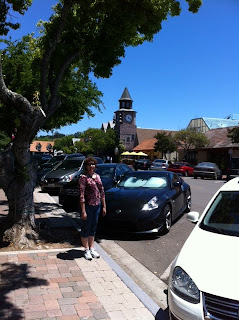 Since my husband enjoys camping, we usually camp out at the local RV park in nearby city of Buellton. After we set up, we head off to Los Olivos to visit the wine tasting rooms.

One of our favorite rooms is the Alexander and Wayne winery. They do a wonderful job on their reds. The Pinot is my husband's favorite, while I tend to enjoy the Cuvee Five, which is a blend in the French style. This year, I tried their chardonnay and found it enjoyable. I don't care for an "oaky" chardonnay, but this one was light on the oak with nice fruit flavors.

Then it was off to test some olive oil. Usually we arrive when the town is having an Olive & Jazz festival, but we missed it this year. We popped into Olive Hill and sampled the flavors, buying a bottle of the basil and garlic. Think I just found a new novelty gift.

My husband and I loved that movie. We adore Paul Giamatti, who is a great character actor.

The next morning, we grilled our breakfast, packed up the 4Runner, and hung around Solving. I enjoyed a "Danish waffle" and coffee while Brent had a doubt chocolate delight pastry with his java.

We walked up to the Santa Ynez mission. I usually take a mass at the mission, but I didn't this trip, just opting for a stroll. The rose garden at the mission isn't what you might think of as a traditional garden, since its surrounded by desert rocks and cactus.

The Santa Ynez mission is part of the missions established by Father Junipero Sierra. It has a traditional mission façade. The missions of California helped to settle the state in the late 1700's, early 1800's. 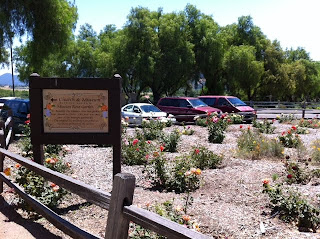 Solvang itself was settled in 1911 by Danish colonists wanting to avoid the mid-western winters. The name means "sunny fields."

On 5 June 1960, Princess Margrethe of Denmark visited the city. She returned in 1976, now Queen of Denmark. In 2011, Solving celebrated its 100 year anniversary. The Queen's husband, Prince Hendrik dedicated Solvang's centennial Plaza on 11 June, which was also his 77th birthday.

Cyclist Lance Armstrong trained for the Tour de France in the area around Solvang since it provides a variety of conditions similar to the French challenges.

There's a vintage motorcycle museum in Solvang with bikes from 1910 on up.

My husband and I found a charming little shop with a Christmas-all-year theme. We also stopped into the Thomas Kinkcaide art gallery. I was surprised to learn Kinkcaide had painted a lot of Disney motifs, but my favorite was a portrait of Venice and St. Mark's Cathedral.

For me, Solvang reminds me of Denmark and my fond memories of Europe. Inspiration can be found everywhere. You go from the wineries, to the Olive tastings, to the mission, to the town itself and ideas just grow. Solvang is low-key, quaint, and charming. It's a nice getaway. Maybe next year I'll get 2 days to explore instead of one. ☺