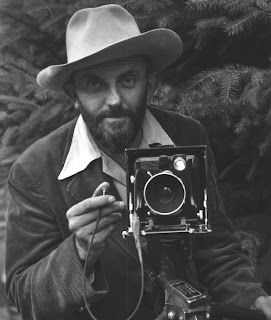 Growing up in New Hampshire, I had no idea who Ansel Adams was, but I loved his photography. My favorite is "Monolith, the face of Half-Dome" and a winter picture, "Half Dome Apple Orchard." What I love about his photography was how detailed the picture was using black and white tones. The detail made me pause, whistle, and say "that's really cool." For me, "Monolith," is simply majestic, and "Apple Orchard" captures the beauty that I find in winter.

Now I knew a majority of his photography was taken in Yosemite, but silly me, I didn't realize he was a native Californian until this year when my son, Andrew, picked Ansel Adams as his wax museum project for school.

Andrew and I learned a lot together and now we both share a love of Adams' photography. His favorite is: "Mt. Williamson." 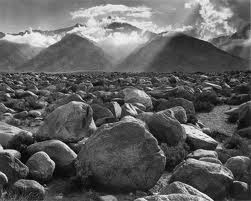 Ansel was born in San Francisco in 1902. Hyperactive, he was also a sickly kid. He had no patience for sports, but he loved being in nature. When he was 12, he taught himself piano and began grooming himself to become a professional piano player until his dad took him to Yosemite for the 1st time in 1916. His father also gave him a Kodak Brownie camera on the trip and Adams' love of photography was born.

In 1917, Adams joined the Sierra Club were he nurtured his sense of respect for nature. The Club's goal is to preserve nature's wonders. Adams fit right in and over the years was very active in the club.

He picked up photography and dark room techniques quickly. His 1st photos were published in 1921.

Adams did it all – he experimented with soft focus and etching, but he preferred a more realistic approach to his photography relying more on sharp focus, heightened contract, and precise exposure as well as expertise in the dark room.

In 1927, he took "Monolith" (my favorite). He also published his 1st portfolio: Parmelian Prints of the High Sierras. 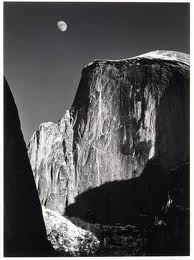 In the 1930's, Adams expanded on his work, focusing on detailed close-ups and large forms. In 1931, the Smithsonian hosted his 1st solo museum exhibition. Most of the photos used in the show came from the high sierras.

In the 1940's during World War II, he went on several photographic assignments for the government. One included traveling to the Aleutians and taking pictures of secret Japanese installations.

In 1963, he released his 4th (and last) portfolio – What Majestic Word. The 1960's also saw major art galleries begin to exhibit his work.

In the 1970's Adams worked to reprint negatives from his vault to satisfy demand for his work. He did experiment with color, taking portraits mainly of landscapes and architecture. Adams didn't like color. He couldn't control the balance as well as a black and white photo and he found color distracting, but he does have some color prints. 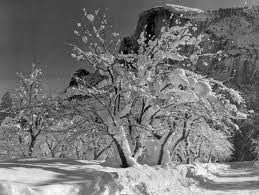 Did you know? His photography "The Tetons and The Snake River" is one of 115 images on the Voyager spacecraft?

QUESTION AND GIVEAWAY: Adams took the first official portrait of a president. Who was the president?

Answer the question and leave your email. I'll pick a winner out of the right responses to receive a copy of my upcoming vintage release, "Journey of the Heart," set in 1946 Sonoma California.


Posted by Stephanie Burkhart at 6:00 AM