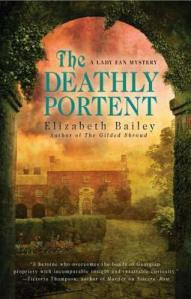 Just finished reading The Deathly Portent by Elizabeth Bailey - 5 Thumbs Up! Awesome book! Now, I haven't read Georgette Heyer, but I hear that this book by Bailey has Heyer influences so if anyone can recommend a good Heyer book, let me know, I'd like to read one.

Bailey pens a taut, suspenseful "who-done-it" with The Deathly Portent. Set in the small English town of Witherly, Lord and Lady Fanshawe find themselves stranded when their carriage loses a wheel. Unfortunately for them, the only person in town who can help them with their problem has just been murdered. Can Lady Fan solve the mystery before the murderer strikes again?

Set in the 1800's against a rural English backdrop, the novel opens with the citizens of Witherly chasing Cassie Dale. They call her a witch and blame her for the death of the local blacksmith, Duggleby. Thankfully, the new pastor, Aiden Kinnerton comes to her aid. He's going to need help in solving Duggleby's murder, though. In a stroke of luck – or unfortunate circumstance – Ottila and Francis Fanshawe find themselves stranded when their carriage breaks down. Ottila is a bit of a sleuth and can't help but investigate the circumstances surrounding the blacksmith's death, especially when she discovers the fire which destroyed the smitty was set deliberately to hide the blow on the head that killed him.

Lord and Lady Fanshawes' arrival and investigation stir up the cobwebs in the quiet town. Ottila and Francis met an assorted cast of characters, all who have motives to kill the blacksmith. There's Duggleby's long suffering wife, Mr. Uddington, whose wife had an affair with the victim, and the old bittys, Mrs. Radlett and Miss Beeleigh, who hated the smith for killing Mrs. Radlett's dog. Unfortunately, the prime suspect is Cassie Dale, the young lady the townsfolk call a witch because she has the gift of foresight.

Ottila isn't fooled by the obvious and can scent out a secret like a bloodhound. As she closes in on a potential suspect, there's another murder. When the stakes are erected – literally – can Ottila avoid danger and reveal who the killer is before she's next?

Bailey's writing is lush and vivid, striking to the heart of the setting by enveloping the reader into the story with authentic dialogue and rich narrative. I felt like a serving girl at the Pakefield's establishment, the Blue Pig, watching as Ottila investigated Duggleby's death. The pacing takes its time as it introduces the colorful citizens of Witherly and slowly uncovers the clues behind the murder. What makes the wait entertaining is the rich characterization.

The Fanshawes are a delight! Ottila and Francis compliment each other well. Lady Fan is a force to be reckoned with. She's determined, focused, and courageous – which gets her in trouble when danger arises. Lord Fan gives Ottila the space she needs while offering his steadfast support. The suspects shine against Witherly's landscape from the old bittys, to the serving girls, to the witch, to the crusty old lawmen – they're serious, entertaining and all will worm their way into the reader's heart with their very human faults and honest emotions.

The Deathly Portent is a sequel to The Gilded Shroud, but the story reads well as a stand alone. As the suspense builds, the novel culminates in an exciting ending. If you're a fan of historicals and mysteries, you'll enjoy this story. This is my first Elizabeth Bailey novel, and it won't be my last. "The Deathly Portent" sweeps the reader off to another time and place and leaves them breathless.

Amazon Buy Link: http://amzn.com/B005GSYY3U
Posted by Stephanie Burkhart at 6:00 AM