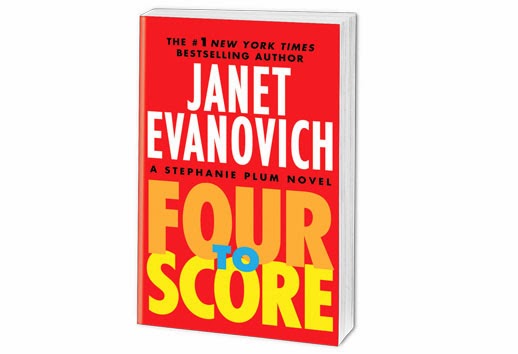 Evanovich hits the bullseye dead center on the dartboard with "Four to Score." Stephanie Plum is after Maxine Nowicki, a waitress who jumped bail after stealing her boyfriend's car. Only there's more to Maxine's disappearance than meets the eye – especially when her mother and friend are maimed.

Eddie Kuntz, Maxine's lame boyfriend, hires Stephanie to find Maxine. Stephanie suspects there's more involved than love letters though. She makes a new friend, Sally Sweet, a transgender, who is a natural deciphering Maxine's codes. Soon, it gets hot for Stephanie when someone torches her apartment and forces her to move in with Joe Morelli for her safety. Will Stephanie score in more ways than one?

Once again, Evanovich pens a saucy sequel worth of the Stephanie Plum series. The fast paced plot is loaded with plenty of twists and there's never a dull moment. The supporting cast, Lula, Sally, Sugar, Ranger, and Grandma Mazur are a hoot and help to lighten Stephanie's load. The first person narrative is full of laughs and refreshing honesty.  Four books into the series and Evanovich has found a way to keep the stories fresh and interesting.

"Four to Score" is a cozy mystery, filled with suspense. The characters will resonate with readers long after the story is over. I hated to put the book down. The novel is a bullseye on my dart board.

Question for you: Who is your favorite supporting character in the Stephanie Plum Series?

Smiles
Steph
Posted by Stephanie Burkhart at 6:30 AM