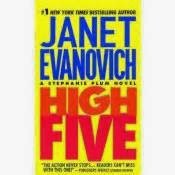 Evanovich pens another delightful romp with Stephanie Plum through Trenton, New Jersey with "High Five." Uncle Fred has gone missing and it's slow at the bond agency so Stephanie decides to help out and look for her uncle. Unfortunately, all she gets is trouble.

Stephanie meets with Aunt Mabel and learns Fred was in a dispute with the garbage company. She discovers Fred was cheap, a cheater, and had photos of a dead person. She reports them to the police. Soon she's being followed by a bookie named "Bunchy" who wants to find Fred, too. When she finally brings in a bail jumper named "Briggs," she's forced to take him into her house when his is wrecked.

Lula comes back to help Stephanie's investigations and Grandma Mazur tucks her gun into her handbag for an assist as well. Ranger offers Stephanie work to get by and both discover an attraction. Can Stephanie find out what happened to Uncle Fred before more people die at the garbage company?

Evanovich's writing is crisp, witty, and easy to read. The narrative will make you smile and then have you anxious about what's going to happen next.

The supporting cast consists of endearing characters that will have you cheering for them. Stephanie is a very likeable heroine, admirable to a fault, still struggling to find her way, but it's reassuring to know she's on the right path.

"High Five" is another excellent story and a "must read" in the Stephanie Plum series. It's full of smiles, laughs, and nonstop action. I highly recommend this book.

Question for you: What is your favorite Janet Evanovich book?
Posted by Stephanie Burkhart at 4:30 AM