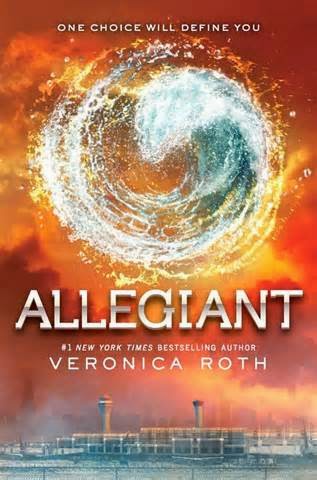 Roth defines life outside the gates of Chicago with "Allegiant." Wanting the factions back, Tris's friends form the "Allegiant" to go up against the factionless and Evelyn. A handful of loyal supporters are picked to venture past the gates and find out what's outside, but are the answers what the allegiant hope they will be?

Tris, Tobias, and their friends go past the gates and discover a community of geneticists living in the old remains of O'Hare Airport. There they come to understand the purity war and the important of having pure genes. It's one shock after another as Tris and Tobias realize the extent of lies and manipulation regarding the inner city where they grew up. Can they save the community from a memory erase or will the lies in the name of genetics continue?

Roth's writing is easy to read, however the book's narrative is told switching between Tris and Tobias. Unfortunately, Tobias' character voice sounds an awful lot like Tris, leaving the reader uncertain at times as to whose point of view the story is being told from. I often found myself double-checking the chapter heading to see which character was narrating.

The plot moves well and there's plenty of twists and turns. The characters are achingly human in this haunting dystopian society. Tobias possesses inner strength, but is tormented by the violence he's encountered. Tris is strong-willed, yet vulnerable when it comes to Four.

Allegiant offers explanations that helps Tris to understand her world. The best part of the novel is the ending - in the aftermath of war, we all still have to pick up the pieces and live. Allegiant is a satisfactory ending to the series and will resonate with readers long after they've put the book down.

Question for you: Did you see Divergent the movie? Did you like it? Why or why not?
Posted by Stephanie Burkhart at 1:30 AM