Set against the bay area of San Francisco, the Golden Gate Bridge has been declared one of the modern wonders of the world by the American Society of Civil Engineers.

The Bridge itself spans the bay between San Francisco and Marin County. Ferry service began as early as the 1820's and grew to a daily occurrence. In San Francisco, you'd catch the ferry at the Hyde St. Pier and it took you to Sausalito in Marin County. The journey took 20 minutes and cost $1.00 per vehicle. (Those were the days, huh?) 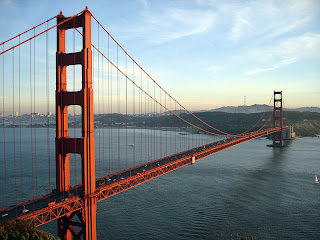 In 1916, a call was put out to entertain practical designs for the bridge. Joseph Strauss, an engineer, jumped on board and his designs were given serious consideration.

Joseph Strauss didn't do it alone – several engineers and designers offered their input, including Leon Moisseiff, Irving Morrow and Charles Ellis. Strauss was the chief engineer in charge of the overall design and construction. 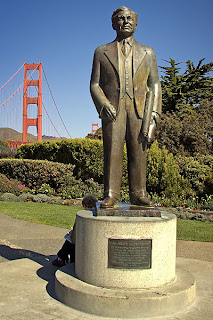 Show Me The Money

In 1928, the Golden Gate Highway District was given authority to finance the bridge.

In 1929 Wall Street crashed. The district couldn't raise the funds it needed so it asked for $30 million in bonds and got it. The budget for the bridge at the time was $27 million.

So bought $30 million dollars worth of bonds? Amadeo Giannini founder of the Bank of America (in San Francisco) bought the ENTIRE issue in 1932 to help the local economy. (Bank of America – go figure! Nowadays I wonder.) 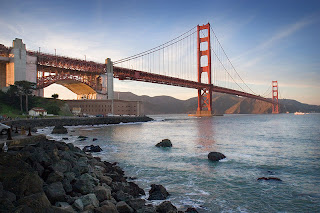 Time to Crack The Nut

The construction started in January 1933. The Golden Gate Bridge can truly say it was made in America. The steel came from New Jersey, Maryland, and Pennsylvania and was shipped to California via the Panama Canal.

NOTE: In April 2012, Jack Balestreri died. He was the last living original construction work on the bridge. 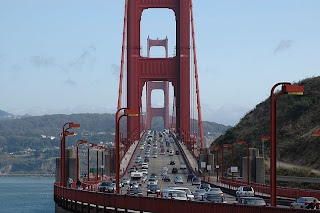 Half Way to Hell Club

A net was placed under the bridge during construction – for safety reasons, of course. With a 245 foot drop from the deck of the bridge to the water, 19 men were saved by landing in the net, thus becoming members of the Half Way to Hell club. 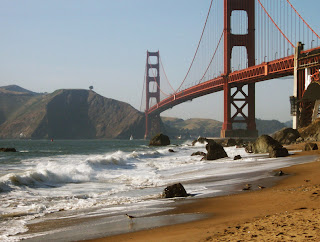 The deck of the bridge is 245 feet over the water if you jump. It takes 4 seconds to reach the water. Your speed? 75 mph/120 kph. Jumpers die from impact trauma on contact with the water. The few that survive will drown or die of hypothermia. Only 26 people have survived a jump. 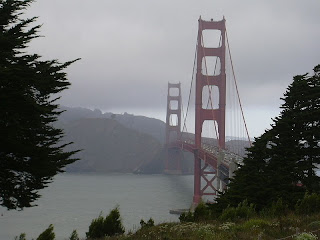 We're Not Finished with the Money Issues

The bridge is undergoing a seismic retrofit which is due to be completed this year. It's needed because of a possible failure of the support on the 320 foot arch over Ft. Point should an earthquake strike. The cost? $392 million.

The closest off the shelf paint to the gate's color is available from Sherwin Williams. It's Fireweed.

The Golden Gate Strait is the entrance to San Francisco Bay from the Pacific Ocean.

It's illegal to scatter the ashes of a loved one from the bridge.


Stephanie's Latest story is Journey of the Heart: a sweet vintage romance set in Sonoma, CA, near San Francisco. 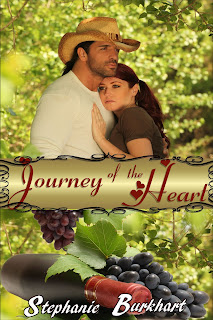 Blurb: Can James help Rachel save her winery or will he drift out of her life the same way he drifted in?