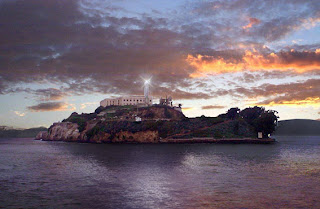 Alcatraz Island sits in the heart of San Francisco Bay. When the Gold Rush brought an influx of people and miners to California, the US Congress in 1850 authorized 9 lighthouses to be built on the West Coast. The Alcatraz light was one of them.

The lighthouse's name is derived from the Spanish word, "alcatraces" which, in my understanding, means pelican. The building was finished in 1853 and lit in 1854 using a 3rd order Fresnel lens. (A Fresnel lens is much thinner, larger, and flatter, and captures more oblique light from a light source, thus allowing lighthouses to be visible over much greater distances.)

The Alcatraz light has the distinction of being the first one in operation on the Pacific Coast. The facility included a cottage for the keeper, a 2-story building, and the tower which was in the middle. The original tower was 50 feet. San Francisco Bay, however, had dense fog and a fog bell was added in 1856. Initially, a person attended to the fog bell. Eventually, it became automated, but I couldn't identify when. 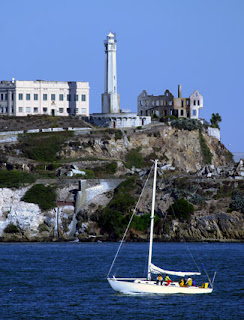 When the lighthouse was constructed it ran on oil, then kerosene, and in 1909 it was converted to electricity. In 1902, the 3rd order Fresnel lens was replaced with a 4th order lens. In 1906, the great Earthquake of San Francisco damaged the original lighthouse. In 1909, the present day lighthouse was constructed (hence the electricity.) The new tower was now 84 feet tall and made of concrete. The lighthouse keepers continued to live in a cottage at the base.

Prior to 1934, Alcatraz was the home of a military prison. That year, it was upgraded to a maximum security federal prison. The lighthouse was outside the prison grounds. In 1963, the lighthouse became automated and the prison was closed. The 4th order Fresnel lens was replaced with a reflecting light.

Today, you can find the 4th order Fresnel lens on display at the Alcatraz museum. The tower is all that remains of the lighthouse. The cottage was destroyed in a fire in 1970. The light continues to work and is monitored by the US Coast Guard.

The island is now open to tourists.
Posted by Stephanie Burkhart at 6:00 AM