A Game of Thrones, Part 1 in a series 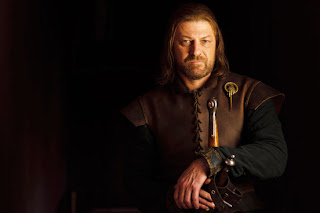 Thoughts and reflections on George R.R. Martin's novel and the HBO series.

About two years ago my husband listened to "A Game of Thrones" on Audible and said I would like it. I grunted. Then he said HBO was making a series out of it and Sean Bean was cast in the leading role. That caught my attention.

I loved HBO's "Sopranos" and "Rome." Both series had a high production quality, great characters, and pitch perfect storytelling. I knew Game of Thrones would be no different so I looked forward to watching the series.

I was not disappointed.

The production quality is fantastic. Game of Thrones is a high fantasy story set in another world, and as the series opening credits unfold, the "casual" viewer sees a map of the world to help them understand the lay of the land.

HOW TO DO FANTASY RIGHT

Several aspects of the series pulled me in immediately. To the north is The White Wall covered in ice and snow. "The Others" are past the wall and have recently been awakened. The Night's Watch, the guardians of the snow and ice infested land know something threatens them – but what? They have to figure it out. Theirs is not an easy job. It's a hard life and a man must not have a wife or start a family. 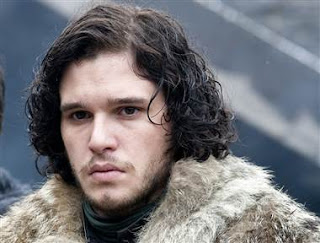 The Stark family of Winterfell is south of the wall. Eddard Stark is a good, honest, and noble man – a true hero who embodies courage and nobility naturally. His family is interesting as well. My favorites: Jon Snow and Arya. Why? Because these are characters struggling to fit into their world.

Another character that just captured my attention was Daenerys Targaryen. She is the daughter of the mad king, Aerys Targargen, who was overthrown by Robert Baratheon. Daenerys goes to live with the Dothraki and marries Khal Drago, their ruler. As Daenerys' story unfolds, I witnessed a naïve young girl gain courage, inner strength and find love. For me, her story was the most compelling because it's such a strong character-driven plot. And the dragon lore was cool, too. 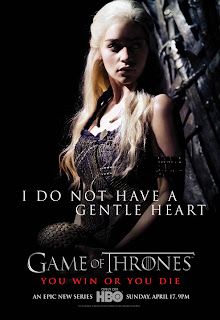 Side Note: George RR Martin won the 1997 Hugo Award for best novella for "Blood of the Dragon" which consisted of chapters only from Daenerys POV taken from the original book, Game of Thrones.

The casting is excellent. Peter Dinklage as "Tyrion Lannister" is dynamic as the clever, rude, and infuriating dwarf. Emilia Clarke portrays Daenerys with a subtle yet commanding performance that will have you cheering for every episode. 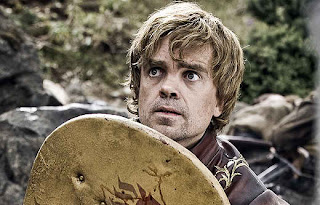 The writing is top notch – engaging the readers with a great blend of dialogue and narration. It's easy to see how Martin was nominated for and won several of fantasy's top awards.

Did you know? David J. Peterson from the Language Creation Society was hired to develop the Dothraki language.

What makes Games of Thrones compelling for me are the characters. Even the heroes have flaws and the villains are capable of compassion, evoking sympathy for them.