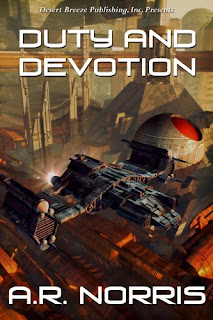 I'd like to welcome fellow DB author, AR Norris to the blog. Her latest release, Duty & Devotion, is a sci-fi/futuristic romance and I'm a sucker for a good sci-fi. And now, here's Amber to talk about love at first sight. Enjoy!
Smiles
Steph

I swear to this day that my husband and I were love at first sight. Of course...that's not really true. It was passion at first sight, which bloomed into love. But man! At the time I swore it was true love, immediately. Knocked me straight off my feet!

I think a lot about love. It's hard not to when the idea of true love is everywhere you turn. Books, TV, magazines, movies...the stories really know how to pump up the fantasy. They mix up intense moments and immediate attraction with love. They take opposites and smash them together. (And I'm not talking about individual characteristics...I'm talking compatibility points.)

What they don't show is the reality. The moments after "THE END".

There are a few things I have figured out with me and my husband's relationship.

1. You have to be able to be friends or you're never gonna make it. (We're talking decades together, people. You have to be able to laugh, cry, get angry, and reconnect with each other again.)
2. There has to be foundational morals and values that synch up.
3. The hardest for many, you have to learn to compromise. (Hello, there are two separate lives merging into one. It takes merger skills of gargantuan ability.)

It is easy to fall into the mystery and allure of passion and attraction. I mean, come on, who doesn't want to be wooed? But, I think one of the most empowering things is to realize when a relationship is not love and step away and have the strength to move on. It defines you and opens you to real love.

Poor older sister Nettie in Duty and Devotion has to try and try again, searching for love. And in a time of war no less. Of course, she didn't make it easy on herself. She went for the guy that was socially acceptable to her position and then to the man that intrigued her passion. Below is an excerpt when Nettie realized her first relationship wasn't right, and she walked away.


EXCERPT
Nettie closed down her console. "It was nice returning to engineering. I'm going to miss it." She looked up when he didn't say anything. He stood, staring at her with those deep grey eyes through the floating image. "Sir?"

"Is that the only thing you'll miss?" His voice was low, barely audible.

Without responding, she stood and gathered her training materials. He cursed and walked around the table to her.

"Damn it, Matterville. You know what's happening. I've tried to hide it, but it's pretty obvious."

She refused to meet his gaze. "What does it matter? There is nothing we can do about it."

He grabbed her by the shoulders. In shock, she looked up and he kissed her. It wasn't soft and seemed more from frustration than anything else, but the heat behind it ignited her. She leaned into him and let herself fall. Her abdomen knotted and her head spun. She slid her hands up to his shoulders and grasped his face.

She caressed his neck, ran a hand over his cropped hair, tickling her fingers. One of his big, rough hands slid down her lower back, braced her against him, and propped her against the table. Her head fell back. He nibbled her exposed neck. She started to say his name... no, she started to call out Captain.

A nagging doubt wheedled passed her passion. This isn't right. She tried to ignore it, but the feeling grew. Nettie managed to pull away.

"No." It was a simple statement, though breathless. She wasn't sure what regret there
would be, but she knew with that answer there wouldn't be guilt. "No." She stated again for good measure.

She nudged him away, moved away herself, and put some distance between them. "We're attracted to the idea of each other. You'd be the safe choice for me and that's not fair to you or to me. I have to focus on survival and being a soldier."

Conflict sparkled in his eyes, the muscles in his face and neck so tense they could snap. "Matterville, you aren't meant for war. You're not soldier material. I can help you with a safe position after training."

It was a blow to her ego and she felt it physically as the breath left her. Shaken, she fought off the urge to tremble. "With all due respect, Captain. I think I am good enough... No, I know I'm good enough."

She picked up her course material and lifted her chin. "If we are finished here, I would like to be excused, sir."

"I apologize, Nettie. That was... inexcusable."

She struggled to find her equilibrium. "It's Officer Matterville, Captain Branz. And no harm done. If anything, you've given me a reminder I sorely needed. Have a good day, sir."

Nettie walked out without looking back. She'd closed the door to her old world and focused on the one she was heading to.

If you want to learn more about me, stop by my blog: Adventures of a Sci-Fi Writer

Duty and Devotion is available at Desert Breeze, All Romance Books, Amazon, Barnes and Noble, Sony, Kobo, and the Apple iBookstore
Posted by Stephanie Burkhart at 6:00 AM