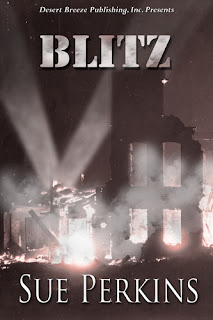 Perkins pens a suspenseful love story set against the backdrop of World War II with "Blitz." Velma Field comes of age just before the dawn of World War II. When she meets Jack Stanley, her courage and resolve is tested like never before.

The novel starts in 1938. The Fields live in Plymouth, England a town on the coast. Velma goes to visit her sister, Florence, and discovers Jack, Florence's brother-in-law in the kitchen. For Velma, the attraction to Jack is heartfelt and immediate. Jack also finds himself attracted to Velma. After a whirlwind courtship, the couple declare their love and plan their wedding for September, 1939.

Fate, however, has other plans. World War II erupts. Jack and Velma have a registry marriage before he is shipped out. Velma tries to maintain her inner strength and moves in with Florence, whose husband also goes off to war. Florence and Velma strengthen their sisterly bond. Florence takes a job working at the post office and Velma joins the Wrens – the Navy's women corps. The war tests everyone's courage, hope, stamina, and endurance. The Germans bomb England continually, blitzing Plymouth. Will Velma's resolve break before she sees Jack again? Will Jack overcome a severe case of Malaria? Can Velma and Jack look the adversities of war in the face to find happiness after it ends? Only time will tell.

Perkins' writing is sharp, engaging the reader right away with Velma and Jack's first meeting. The writing style is easy to read. The story has a nice flow to it. The descriptions are rich and vivid, allowing the reader to picture the setting in their mind as they read. The dialogue captures a rich authenticity of the times.

The characterization is wonderful. Jack and Velma will tug on your heartstrings as the strong supporting cast. Florence's fate had me choking up and I realized then just how subtly, yet deeply, Perkins' story had touched me.

Jack is a noble guy and takes his commitment to the Army seriously. Still, when the Army separates him from Velma, his resolve is tested in way he didn't expect.

Velma wants to prove she's a strong, capable young woman, not just to her family, but to herself. Her worries are something many can identify with today.

The story is sensual for romance readers with tender kisses and sizzling caresses. From page one, Blitz will leave the reader wondering if Jack and Velma will find happy ever after. Blitz will put you in the thick of World War II and leave you turning the pages to find out what happens next.
Posted by Stephanie Burkhart at 6:00 AM