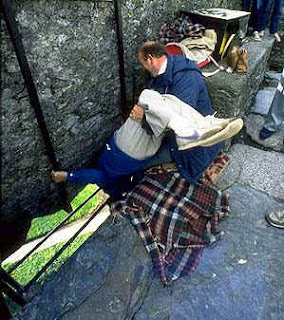 We've all heard of the blarney stone. Those who kiss it are said to be endowned with the gift of gab (and eloquence.) Mind you, it's not an easy stone to kiss, but many try each year.

The stone itself was built into the battlements of Blarney Castle, in Blarney Ireland approx. 5 miles (8 kilometers) from Cork, Ireland. The stone was set into the tower of the castle in 1446.

So what's the attraction? What's the myth that compells many to visit?

One myth involves the goddess Clíodhna. (Queen of the Banshees) Cormac Laidir MacCarthy built the Castle, but he was involved in a lawsuit. He appealed to Clíodhna for her assistance. She told MacCarthy to kiss the first stone he found in the morning on his way to court, and he did so, with the result that he pleaded his case with great eloquence and won. Thus the Blarney Stone is said to impart "the ability to deceive without offending." MacCarthy then incorporated it into the parapet of the castle.

Queen Elizabeth I commanded the Earl of Leicester to take possession of the castle. Whenever he tried to talk to McCarthy, he always had a suggestion (or an excuse) to delay the negotiations. Whenever the Queen asked the Earl for a report, the Earl had to report the castle wasn't his. The queen was said to be so irritated that she remarked that the earl's reports were all 'Blarney'.

To kiss the Blarney Stone, people lay on their back and stick their head in a hole. It's not an easy thing to do. Anyone ever get the chance to kiss the blarney stone?
Posted by Stephanie Burkhart at 6:00 AM