A look at the John F. Kennedy Presidential Library 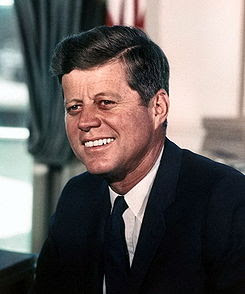 I love the presidential libraries. They really give you a feel for the man and his times during his presidency. The John F. Kennedy Presidential Library is in Boston, Massachusetts on Columbia Point in the Dorchester neighborhood. The library is easy to find and has a gorgeous view overlooking the Atlantic Ocean. I had an opportunity to visit it in October 2001. However, getting it built was quite a challenge.

Before he died, JFK expressed a desire to build his presidential library "near scholarly resources." A month before he was assassinated, he chose a plot of land facing the Charles River next to Harvard's Graduate School.

In December 1964, Jackie Kennedy picked architect I.M. Pei to design the library. She liked that he had a variety of ideas and that he didn't seem to have just one way to solve a problem.

Unfortunately, the project stalled. The Mass Bay Transit Authority delayed in selling the land. Then Pei needed to study the soil, which took 6 months. In 1971, the school changed its mind. They saw the library as attracting such unsavorys like tourists, fast food franchises, and souvenir shops. A new (and current location) was chosen, but it was on the site of a landfill. That took time to clear. Pei designed a simple geometric structure with a large glass pavilion. Construction began in June 1977.

In October 1979, President Jimmy Carter dedicated the library. The library highlights the Cuban Missile Crisis and the US Space program along with Kennedy's presidential campaign. Ernest Hemingway's memorial library is also there.

One of the neatest artifacts the museum has is a coconut shell dating from Kennedy's World War II military service as the Commander of PT 109. Kennedy was also fond of scrimshaw and sailing ship models.

The library gives out the Profile in Courage award. Kennedy's intent with his novel, "Profile in Courage" was to show 8 U.S. Senators who risked their carrier by taking principled stands for unpopular positions. The award itself is presented to those public officials who have demonstrated politically courageous leadership.

Has anyone visited the library? I'd love to hear your thoughts. What was your favorite exhibit?