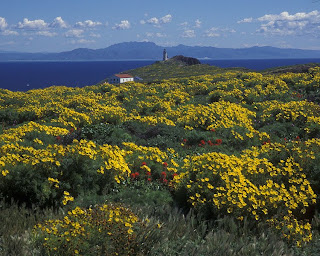 Every lighthouse has a story behind it and the Anacapa Island light is no different. Anacapa is an island off the coast of Santa Barbara. It's actually a chain of small island simply called: west island, middle island, east island. They're linked together by a set of reefs that you can see during low tide.

Anacapa's rise to notoriety begins on 2 DEC 1853. A side-wheel steamer called the Winfield Scott was enroute to Panama from San Francisco.

NOTE: Before the Panama Canal was built, ships would leave a west coast city like San Francisco and travel along the coast to Panama. There, they would travel over land, approx. 30 miles, to the east coast of Panama where they would take a second boat, which would then take them to New York City or any other city on the east coast. 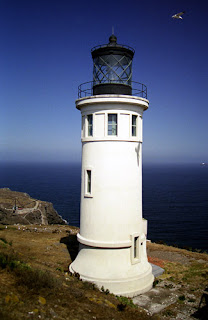 NOTE: the remains of the Winfield Scott are still submerged just north of the island.

News of the wreck made it to President Franklin Pierce who issued an executive order – Anacapa would be reserved for a lighthouse. It took a while to get there.

In 1874, an unmanned acetylene lens lantern was built on a sketal tower. A whistling buoy was also anchored 5/8 miles off the east end of the island.

Note: In a lens lantern the 2 components are combined into one structure. Lens lanterns have been around for quite a while so there are many different ones which may add to the confusion.

A buoy lamp is a lens-lantern. The glass or transparent plastic part is the lens while the bronze or aluminum or opaque plastic body of the lamp is the lantern. The beautiful 1 and 8 day oil lamps that were hung on poles as minor aids or on pierhead structures, the cut glass and bronze acetylene aids and even the modern plastic lamps are all lens lanterns. Over the years there have been many sizes of lens lanterns.

Like today, tragedy had to happen for action to be instigated. On 28 FEB 1921, the steamer, Liebre, grounded on Anacapa just under the unmanned lighthouse sustaining damages up to $40,000. As before, it was very foggy, but inspectors noted the buoy had overturned and wasn't functioning.

The Anacapa lighthouse station began construction in the spring on 1930. Four houses were built and the light received a 3rd order Fresnel light. A 39 foot tower and a fog signal were constructed near the highest part of the island.

Note: A Fresnel lens design allows the construction of lenses of large aperture and short focal length without the mass and volume of material that would be required by a lens of conventional design. Compared to conventional bulky lenses, the Fresnel lens is much thinner, larger, and flatter, and captures more oblique light from a light source, thus allowing lighthouses to be visible over much greater distances.

In 1962 or poss 1968, (the information is in conflict) the coast guard converted the lighthouse to an unattended station again. The reason? Because missiles were test fired off Point Mugu. The island residents had to spend several hours each week in a shelter.

Today, you can still visit Anacapa and see the lighthouse as well as some of the original building from the 1930's. The lighthouse still aids in navigation.
Posted by Stephanie Burkhart at 7:49 AM