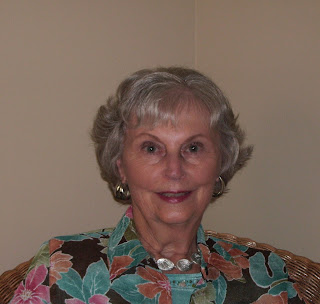 I'd like to welcome author Linda Swift. She's a fellow author with me at Desert Breeze. She has upcoming release with Desert Breeze in April, "Summer Love." Today, she talks about visiting the Bronte estate. Enjoy! You can find Linda on the web at: http://www.lindaswift.net.

On Easter Sunday as a special gift to me, my husband gave up his much-needed day of R&R so that we could visit the Bronte home in Haworth. Although it was mid April, as we drove from East to West Yorkshire the landscape became more bleak. And the narrow roads grew steep and winding long before we reached the village of the famous literary family.

We left our Ford hatch-back in the car park at the bottom of the hill and joined the people on the cobbled street that led to the dark grayish-brown brick two story building at the top. The sky was a dull gray, hinting at impending rain, and we took our brolly although the chill wind would likely have turned it inside out had we used it. 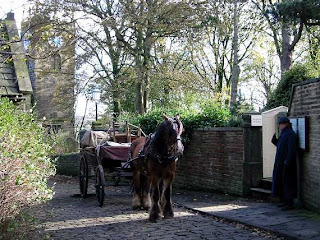 My first impression was that the parsonage was much more grand than I had expected, even from the photographs I'd seen. An additional wing had been added by a later vicar and I closed my vision to that and imagined it when the Brontes lived there and found it still impressive. We paid the small admission fee and entered the house where we wandered from room to room. We were shown the beds where the Bronte family slept, the kitchen were they ate, the table where the Bronte sisters wrote. We saw the sofa where Emily reportedly died and clothes that Charlotte wore. (For photos inside the parsonage go to: http://www.haworth-village.org.uk/brontes/parsonage/parsonage.asp)

Patrick Bronte's study occupied one of the front rooms and we were told that he spent most of his time here, ignoring his six children who ran wild on the wild moors that surrounded them. Perhaps the world would not have benefitted as much from the Bronte genius had the vicar had better parenting skills and supervised his brood more closely! Patrick was a poor Irishman who became a man of letters, changing his name from Brunty in the process. It is difficult to imagine an Emily Brunty.

Following the early death of Patrick's wife Maria, her sister came to live at the parsonage and the four older girls were sent to a Clergy Daughter's boarding school to be educated. After a year of harsh conditions and meager diet, young Maria and Elizabeth, aged ten and eleven, died of tuberculosis. One of these girls was reported to have exhibited, even at such a young age, greater talent than her famous sisters. Had they lived, we might now have more Bronte literary treasures. 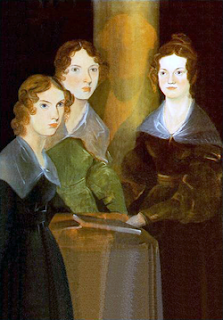 Emily and Charlotte were brought home to be taught by their father, along with their younger sister Anne and only brother Bramwell.I had read of the little books the Bronte children wrote of imaginary kingdoms and how they acted out these stories in their play. Several of these were displayed but I was unprepared for how small the books actually were. Each measured about two inches wide by three or four inches long, with ink lettering so fine one needed a magnifying glass to read it. It is said they wrote in these miniature books to avoid them being read by adults. Bramwell was a talented artist and many of his oil paintings hang in the home and museum. His work is typical of the period and evokes the same melancholy themes as his sisters' books. The deaths of Bramwell 30, Emily 31, and Anne 29, in such a short period of each other, and even Charlotte at 38, further deprived the world of their giftedness. Only Patrick survived to the ripe old age of 84.

Although the exterior of the parsonage had many windows, the interior seemed dark and somewhat depressing throughout. A large well-stocked bookstore adjoined the house and all of the Bronte books were available at a very reasonable cost. We didn't spend a lot of time here as there was so much to explore in one afternoon. Visible from the museum was a garden where a stone statue of Charlotte, Emily, and Anne faced the floor to ceiling windows. Although many people milled about, there was an air of reverence as if we walked in a sacred place where the spirits of departed Brontes still lingered and so it seemed to me.

From the front of the parsonage, to the right across the lawn, was the family graveyard. We have visited many cemeteries across England but had never seen tombstones that resembled thick concrete doors laid horizontally on low supports. These were about four by six feet and had inscriptions engraved on them that were quite lengthy.We walked among them and read quite a few and I wished later that I had copied some of them.
(For enlarged photo of graveyard, go to: http://www.bronteparsonage.blogspost.com)

The illustrious Bronte family, except for Anne, were entombed in vaults inside the adjacent church. The church was just beyond the graveyard and we visited it briefly as it was not the original building where Patrick Bronte had served as vicar. We walked to the rear of the parsonage, along a fenced corral that must have contained animals in earlier days. And although spring flowers bloomed along the path, they did little to dispel the overall feeling of gloom. From here we could look out across the rugged moors, now green, and see the placid sheep grazing on the hillsides. But I could imagine how it must have looked in winter covered in snow with gales howling across the moors. It was easy to visualize Catherine and Heathcliff meeting in the mist. It seems inevitable that Wuthering Heights and Jane Eyre were created from this environment by daughters of this tragic family. I could not imagine a Pollyanna story emerging here! 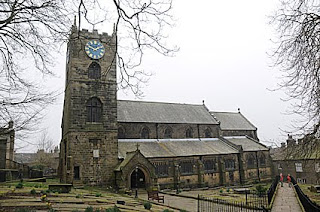 Looking back now, walking on that Easter Sunday afternoon where Emily and Charlotte had walked was akin to a religious experience. And I treasure it among my favorite memories of the time I was fortunate to live in Yorkshire County. But on that dismal day, as we wandered down from the hilltop, I welcomed my husband's suggestion that we take tea to warm our insides against the chill before we headed home to Hull. And all thought of Brontes was replaced with visions of shortbread to accompany it.
Posted by Stephanie Burkhart at 6:00 AM