Genre Tuesday - Paranormal Writing: The Zodiac in the Sky 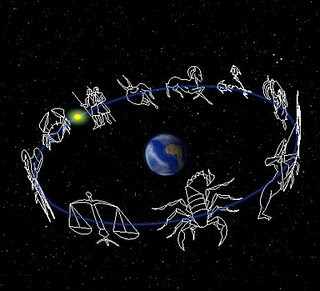 Astrologers have explored the heavens since early Greek and Roman times – as even far back as ancient Babylonia. They gave those constellations that follow the sun’s ecliptic a zodiac name to help identify them. But why those constellations? What inspired them? I thought I’d take a look at the myths and legends that are behind the zodiac we see in the sky today.
Ah, the zodiac! We know it well. There are twelve signs, and surprisingly, their basic descriptions seem to fit the type of personality we exhibit.

The night sky is a dark presence in paranormal writing, often times taking on its own personality. After all, vampires come out at night, men transform into werewolves during a full moon, even zombies and ghosts are known to do their haunting at night.
When blending paranormal and romantic elements, looking to the night sky and the dynamic zodiac, can give you, the writer, the inspiration you need.

In my novel, “The Hungarian,” my hero, Matthias, is a werewolf who uses the constellations in the night sky to keep him company. He learned the myths behind the zodiac in the stars. I thought I’d share a few of them with you today.
Pisces is well known as representing two fish, but did you know those fish were Venus and Cupid who disguised themselves as fish to escape from Typhon?

Aries has always been represented as a ram. In fact, Aries was a golden ram rescued by Phrixos who took him to the land Colchis.

Taurus is a bull. What I love about Taurus is the stuff you can find in the constellation. Aldebaran is a red giant star that acts as the bull’s eye. The Pleiades, a star cluster, can also be found in the bull’s shoulder. In myth, Taurus represents Zeus/Jupiter who turned himself into a bull to carry off Europa, the daughter of the king of Crete.

Gemini represents the twin brothers, Castor and Pollux, who helped to protect ships and sailors.

Cancer represents a crab. Juno sent a crab to kill Hercules, who squashed it with his foot. Poor crab! Juno lost out with that idea.

Leo is usually associated with royalty. I believe it has Babylonian roots.

Virgo is usually represented as a maiden. She’s the goddess of the farm and harvest and she typically holds a shock of wheat. Again, I believe her origins are Babylonian in nature.

The sun usually find the autumnal equinox in Libria. The constellation is comprised of a set of scales, representing balance. Interestingly, the Romans chopped off Scorpio’s claws to make part of Libria.

Juno/Gaia sent the scorpion to kill Orion, who boasted he would kill all the animals on Earth! Poor Juno. She can’t catch a break. Scorpio and Orion are on opposite side of the sky, destined to never find each other, but always in search of the other.

Sagittarius is a centaur, a half-man, half-horse archer named Chiron, who is shooting an arrow and comes from Roman myth.

Capricorn is usually represented as a seagoat. Pan used it as a disguise.

Aquarius is a water carrier. Again, this constellation has Babylonian origins.

When you look at the constellations in this light, you have a lot of paranormal romantic potential. Keep in mind the myths that the night sky possess, and see if you can’t apply them to your romantic paranormal creatures. You’ll add depth to your stories without realizing it.
Posted by Stephanie Burkhart at 6:36 AM