My new cover! The Wolf's Torment 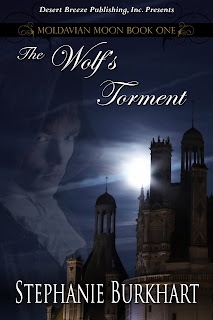 Hi all, just wanted to share my latest cover - this one is "The Wolf's Torment" which will be out 1 MAY 2011 with Desert Breeze. The cover artist is Jenifer Ranieri and I love it. I really captures the gothic overtones of the story. I thought today I'd share a blurb and an excerpt from the novel. (Disclaimer: We're in the final stages of editing, but the excerpt might change a little between now and publication. Enjoy!)

Leave a comment and I'll pick one lucky winner to receive a PDF copy of Heart of Moldavia, a prequel short story.

It's 1865 in Moldavia, a country nestled against the shores of the Black Sea, and Crown Prince Mihai Sigmaringen returns after receiving an education in England. His best friend, Viktor Bacau joins him. Mihai is intent on modernizing his nation, but he's also a witch, and it's time he embraces his heritage. The tasks in front of him are many including getting married.

THE SET UP:
Mihai has taken Theresa to his tower in Delfin Castle and they are getting to know each other better:

"We'll go as soon as it warms up. Do you have any idea where you would like to go for your honeymoon?" Mihai asked.

She smiled as heat seeped into her cheeks. "I have too many places I'd like to visit. What do you suggest?"

"We could take the yacht to Constantinople."

"All right."
He wrinkled his brow. "That was almost too easy."

"I am very agreeable, but you'll find I do have my opinions."

"I look forward to taking you on several adventures -- and hearing your opinions."

She smiled, glad that he was opening up with her.

"Can I ask you a question? You must promise to keep it between us," he said.
She nodded.

"Did you dream of me during Christmas?"
Her stomach tightened, a little anxious. "Yes, I dreamed of you."
"Were you being chased by a wolf?"
"I was."

His face lit up. "So it's true -- we've been sharing dreams since we were little."

She nodded her head, surprised he was so accepting of it. It had been unnerving at first, but she had learned to enjoy it.
"Do you know why that is?" he asked.

"Every experience in my dreams was real and true."
He nodded, agreeing with her. "I know why."
"Why?" She rubbed her chin with a finger.

"Again, I must have your confidence."
"Of course."

"My mother was a witch. I have inherited her gifts."
"I know nothing about witches."

Relief crossed his face. "I don't know much myself. My mother died when I was ten and I wasn't trained."

She accepted him at his word, his tone of voice full of conviction.

"Is Sonia a witch?"
"Most likely. We've never really wanted to explore that side of us."

He scrubbed the back of his head, a little uncomfortable, but remembered Sonia's words. Be honest. "Well, I think we've both been afraid. We didn't want other people to think we were different."

"I wouldn't say you were different, just unique."

"This doesn't bother you?" he asked.

"I may know nothing of witches or witchcraft, but it makes sense how we were able to share dreams, and quite honestly, I liked the dreams we've shared."

He placed his hand over hers. A spark of warmth trailed up her arm. "I'm starting to learn more about witchcraft, so I hope you won't be afraid. I want to understand my gift."

She studied his expression. This was a deep-seated fear of his. He didn't want to possess these talents, but he was willing to learn more so he understood it and he wanted her to accept this about him. She sensed something deeper from his expression -- he couldn't bear her rejection.

"I will never leave you," she said, softly. And she meant it.

A small smile graced his lips. Again, it grew quiet, but Theresa believed she had earned a certain degree of trust from him.

*******
The Wolf's Torment will be released 1 MAY as an ebook avail on Kindle, Sony ereader, B&N Nook
Posted by Stephanie Burkhart at 7:01 AM