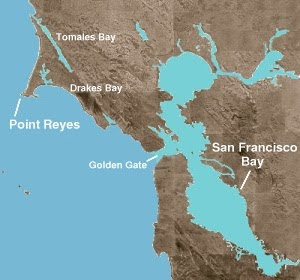 Point Reyes is actually a very prominent cape on the Pacific Coast in Marin County, California, approx. 30 miles west of San Francisco. I've enclosed a map so you can picture it. If you ask me, you can't get any more west than the Point Reyes Cape on mainland USA.

Spanish explorer, Sebastian Vizcaino, anchored his ship in Drake's Bay on 3 Kings Day, 6 Jan 1603, giving the name Punto de los Reyes (King's Point/Point Reyes) to the peninsula. In Fact, the region is known as a peninsula due to Tomales Bay on the northeast and the Bolinas Lagoon on the southeast.

Interesting Side Note: Drake's Bay was named after the famous English explorer, Sir Francis Drake in 1579.

Picture a ridge running down the peninsula's nw/se spine with forested peaks. That's the topography. The lighthouse is found on a cliff and to reach it, one has to walk down 300 steps.

Point Reyes is known for its heavy fog. Because of this, the light from the lighthouse is the only light visible to ships. Nowadays, its fully automated. What's really cool about the lighthouse is that it still houses the first order Frenzel lens built for it. It produces a flash every five seconds.

NOTE: A Frenzel lens is an unique type of lens which is found in lighthouses. 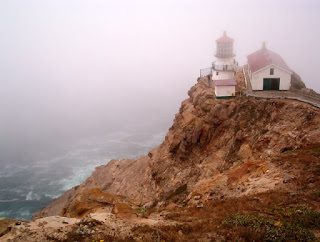 Of course what gives a lighthouse its personality is the history and the Point Reyes lighthouse can tell a few tales.

In 1595, a Spanish galleon, San Augustin, sought to avoid a storm. Thinking Point Reyes was an island, the ship's captain miscalculated and ran the ship aground. It was the first recorded shipwreck on the West Coast.

In 1855, a lighthouse was authorized for Point Reyes, but it took 15 years before it was actually built. The Lighthouse Board spent the time haggling over what it was to offer the landowners for their land. During this time, 14 shipwrecks occurred.

The environment is hard on the lighthouse. High winds around 40 mphs are the norm and the fog is heavy. 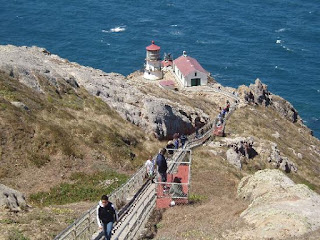 Perhaps the most suspenseful story occurred in 1927. Lighthouse keeper, Fred Kreth, discovered three fisherman stranded at the bottom of the cliff. Due to the surf being too high, the Coast Guard couldn't manage a rescue. Kreth rappelled 200 feet down the cliff, braced himself on a thin ledge, untied the rope around his waist and threw it 50 yards down, pulling each man to safety.

Interesting note: electricity finally came to the lighthouse in 1938. The station was automated in 1975.

Visit Point Reyes between JAN – APR and you might see a couple of grey whales as they journey on their annual Alaska-Mexico migration.
Posted by Stephanie Burkhart at 6:00 AM