A Book Review for The Time Traveler's Wife 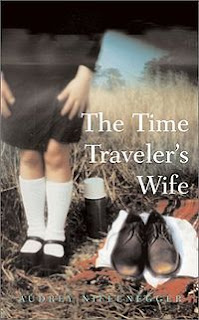 First, let me apologize for not writing sooner - it's been busy!! School let out and Andrew had swim lessons. I changed shifts at work and now I work from 6 pm to 2 am. It's not much of a change, but enough to make me a little more functional. I've been writing and reading and trying to keep up with my boys. That said, I just finished this book and I thought I'd share my review with you.

Niffenegger weaves a tale of intrigue that remains strong through decades of uncertainties. "The Time Traveler's Wife is an unconventional romance and an atypical science fiction novel, blending both genres as well as sprinkling in a dab of social commentary to create a very human plot.

The novel starts with Claire waiting for Henry, a predominate theme in the book. Her husband, Henry, travels through time. He believes its a genetic abnormality and he can't control it. The novel takes place between 1968 and 2008. Claire and Henry meet as adults. Claire is twenty. Henry, it is revealed, has been time traveling since he was five years old, after a visit to a museum that had a profound effect on him. He recalls first traveling through time to visit Claire when she is six. Young Claire soon sgets used to a man popping out of time to see her. She develops an eccentric relationship with the time time traveling Henry, which to Niffenegger's credit works and doesn't come off as creepy.

Early in the book, there is an unusual scene when Claire is thretten which her father and brother keep her from Henry. Claire doesn't know what to make of it, but time marches on in a linear fashion for her, and soon she meets Henry at the library where he works. When they meet, he is 28.

Henry leaves his girlfriend, Ingrid, for CLaire. Claire is used to Henry's time traveling and accepts him for what he is. After meeting each other's family, they marry.

The couple tries to live as normal a life as they can. Claire is an artist and Henry works in a library. After seeint their friends, Gomez and Charisse, have children, they try to have one of their own. Henry seeks out a genetic counselor. The reason for his time traveling abilities are given here, which to Niffenegger's credit is a creative take on the concept.

Claire has several miscarriages before the doctors realize they have to suppress her immune system to get her to carry to term. Clarie finally gives birth to a girl, Alba, when she is 30. Soon, they learn that Alba can time travel, too.

Henry's time traeling takes a toll on his bodyt. He gets frostbit on his feet which have to be amputated. Then he involuntarily time travels to the past, and since he can't run away, he's shot by deer hunters when Claire is 13. Claire is 38 when he dies.

The plot is tight. Niffenegger's explanation of Henry's time traveling abilities is plausible, making the story work. The pace isn't fact, nor does the story drag. It moves from event to event with precision.

Niffenegger writes in a very "up front" style. It's easy enough to read, but very direct. Her characters are believeable, but not very sympathetic. In a way, Claire embodies a very traditional female role in waiting for Henry, while he has numerous adventures as a time travel, taking on a more traditional male role. Toward the end, Claire sheds her traditional role to become a modern woman.

The story is told using a journal entry format from Claire and Henry's perspective, which works well. If anything, the story lags a little since it blends romance and science fiction without commiting to either. Henry and Claire are in love but it seems a given and not a discovery.

What makes Niffenegger's a story a gem is her creative take on time traveling, making it a genetic condition, thus not conforming to traditional time traveling norms.
Posted by Stephanie Burkhart at 2:20 PM