A bite of New Hampshire 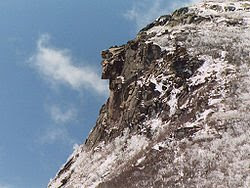 I've got a lot of things I'd like to do with my blog and not enough time. Haha. Let me list my goals:

Share some excerpts from my writing
Discuss writing tips and genre writing for aspiring authors
Share any promotional material from my published writing
Talk a little about my new home, California
Talk a little about my old home, New Hampshire, and it extenstion of that, New England.
Share book reviews with you

So, as you can see, I have a lot of goals with my writing. I think what I will do is pick a day and use that as topic.

How's that? Now that I have some focus, let's have some fun. The picture I've added is New Hampshire's Old Man of the Mountain. I visited the Old Man in the early 1990's with my friends, Aly, Idgy, Karen & sister, Christine along with Brent, my husband. It was the one and only time I saw the Old Man in person. The Old Man used to sit above a gorge and we had a fun time exploring the gorge that day.

I loved showing Brent my home, but we were young at the time, and I don't think he appreciated it much. We haven't been to NH since 2001, when my sister got married. That was before kids, but I was 6 months preggers with Andrew.

What always impressed me about the Old Man was how majestic he looked. Noble even with that aqualine nose and that rock hard jaw. The Old Man not only watched over me, but all the inhabitants of NH, reminding us of our humble beginnings and our colonial heritage.

What also impressed me was the fact this was a natural rock formation. No one carved this. The Old Man has been around for years.
The Old Man was made out of granite (That's NH's nickname - The Granite State) The first recorded mention of the Old Man was in 1805. It collapsed on May 3, 2003. (from Wikipedia.)
The Old Man was formed by glaciers, but the residents of NH didn't spot it until 1805. Since then, it was inbedded in NH history.
Face-like stone formations are common around the world. The Old Man was famous largely because of statesman Daniel Webster, a New Hampshire native, who once wrote: "Men hang out their signs indicative of their respective trades; shoe makers hang out a gigantic shoe; jewelers a monster watch, and the dentist hangs out a gold tooth; but up in the Mountains of New Hampshire, God Almighty has hung out a sign to show that there He makes men." (taken from Wikipedia)

U. S. stamp issued in 1955. (The other photo I've posted.)
The writer Nathaniel Hawthorne used the Old Man as inspiration for his short story "The Great Stone Face," published in 1850, in which he described the formation as "a work of Nature in her mood of majestic playfulness." (taken from Wikipedia)
The profile has been New Hampshire's state emblem since 1945. It was put on the state's license plate, state highway-route signs, and the back of New Hampshire's Statehood Quarter, which is popularly promoted as the only US coin with a profile on both sides. Before the collapse, it could be seen from special viewing areas along Interstate 93 in Franconia Notch State Park, approximately 80 miles (130 km) north of the state's capital, Concord. (taken from Wikipedia)
When the Old Man finally collasped, I was in California. My friend, Karen, sent me a blurb from Manchester's paper, The Union Leader, talking about the collapse.
I thought I'd lost an old friend.
Heck, I'd only seen the Old Guy once in person, but he embodied everything I believed as a New Englander. He was tough, loyal, and viligant. He was a hearty New Englander. And so am I. You can take the girl out of New England, but you can't the New England out of the girl.
Rock on
Posted by Stephanie Burkhart at 7:52 AM