Book Review for "All My Hopes and Dreams" 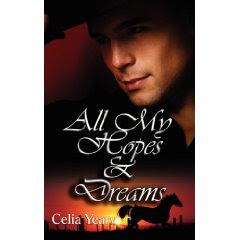 I just recently finished reading this western romance and I thought I'd share.
************
Yeary weaves a romance full of hopes and dreams that her heroine, Cynthia Harrington yearns to fulfill. “All My Hopes and Dreams” is a solid western romance set in Texas in the 1880’s. Though Yeary’s skillful writing, the reader is transported to the old west to witness the romance between Ricardo and Cynthia – one full of challenges. It’s almost one challenge too many for Cynthia.

The story starts with Cynthia determined to leave Nacogdoches and her father’s arranged marriage. On her way out of town, her horse mis-steps and her carriage turns over. Enter Ricardo Romero. He comes to Cynthia’s aid and keeps her safe. Cynthia is initially grateful for his help, but then she learns her father hired him to follow her. Ricardo brings Cynthia home and she resigns herself to her arranged marriage.

Cynthia’s fiancé has doubts about the marriage and voices them to her father. Ricardo takes advantage of that and asks Cynthia to marry him at the spur of the moment. Cynthia says yes. She’s attracted to Ricardo and while she doesn’t know him, she’s looking forward to getting to know him. Ricardo is more guarded in his thoughts, but he can’t deny he’s intrigued with her.

Ricardo takes Cynthia to his ranch house across the state. His parents are still married and run the ranch. While Ricardo’s father seems to accept Cynthia, her mother-in-law, Felicitas, does not and makes life unpleasant for Cynthia. Cynthia takes matters into her own hands and moves out of the ranch house. She makes friends with the ranch wives. Ricardo is puzzled by her behavior. He doesn’t realize how unfriendly his mother is towards Cynthia.

Ricardo takes Cynthia away on a romantic getaway and they make love. Felicitas tries to stop the couple, but has an accident. Ricardo and Cynthia find her hours afterwards and get her help. Felicitas can’t walk and needs to be cared for. Cynthia is expected to be the primary caregiver. She steps up to the plate, but does not endear herself to Felicitas. Felicitas enlists Starr Hildago’s help, (a former flame of Ricardo’s) to get rid of Cynthia.

Cynthia holds up in the face of Starr’s flirting with her husband, and Felicitas’s insults. She starts a school for the kids at the ranch, but instigates the anger of one of the hands by asking that his children go to school.

The rangers come looking for a criminal. Cynthia’s bow is all ready tight, but it snaps when she finds her husband and Starr in a compromising position. She goes to the house to pack and discovers the criminal holding Felicitas hostage. Cynthia keeps the criminal at bay until the rangers can put him in custody. Then she packs her bags and gets on the next train to Nacogdoches. Ricardo realizes he’s in love with his wife and follows her.

The plot moves well and never drags. Yeary’s writing style is easy to follow. I liked how she emerged the reader in the world of ranching and horse breeding. Cynthia is a likeable heroine, if anything I would have liked to have seen more introspection on Ricardo’s part. I never did understand why he chose Cynthia over Starr since Starr seemed better suited to him.

Yeary’s love scenes are tame, but her romantic scenes are well done. “All My Hopes and Dreams” is a nice escape for a rainy Saturday.
Posted by Stephanie Burkhart at 8:28 AM