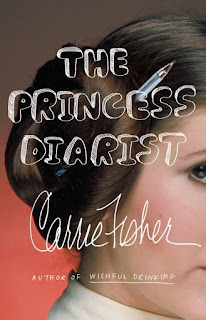 Carrie shares several pages taken from her diary that she kept at the time. Even back then, Carrie displays her wit with words. Her honesty shines in this memoir.

The novel is easy to read, sharp and revealing. Fisher, however, paints in broad strokes, so vivid, specific recollections are hard to come by. She captures emotions well, including confusion, uncertainty, and frustration. However, there are no insights about what it was like making the movie, working with George Lucas or any memories about her castmates.

I bought this book when I heard Fisher had a cardiac episode on a plane because I wanted to get to know her a little better, and I certainly learned a lot about the person she was while filming Star Wars.

"The Princess Diarist" is a heartfelt memoir. It strikes sad, poignant notes on the eve of Carrie's greatest success. Thank you for sharing, Carrie.
Posted by Stephanie Burkhart at 1:30 AM