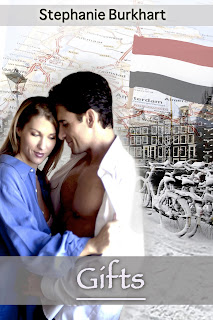 Christian Jansen had no idea what to expect. He jammed his hands into his jeans pockets and stared out the wide glass windows of Amsterdam's Schiphol Airport waiting for her – Famke deVries.

Her plane from New York taxied toward the gate. He drew in a breath, hoping to calm his nerves. The last time he saw her was four years ago when she was sixteen and went to study in the States. Famke loved ice skating as much as he did.

Skating was in his blood. Ever since he was two and had received his first pair of skates from his father, he wanted to represent his country at the Olympics. His heart constricted at how he'd almost ruined his dream. Famke offered him a second chance. He couldn't blow it.

The gate extended toward the plane's door. Christian closed his eyes briefly, trying to push the unbidden memory of that awful day away – the day his blade caught on uneven ice. Christian was a pairs figure skater. He stumbled and dropped his partner whom he had in an overhead lift. Her blade sliced his forearm. Katrien reached for him, missed, and her blade struck his temple. He couldn't remember what happened next – he'd lost consciousness. Later, he woke up in the hospital to a sprained ankle, a broken arm, and a deep scar on his face. It took weeks for him to heal and several more weeks of physical therapy to gain his strength and form back. In that time, Katrien left him to work with another skater.

Christian had doubts, fears even, about getting back on the ice, but he believed he had recovered in body – and spirit – and he wanted another chance on the ice.