Happy 74th Birthday to the USO! 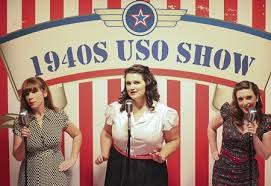 The USO is turning 74 years old on 4 FEB 2015 and I thought I'd sharing some fun facts about this organization that has supported America's troops since World War II.  I'm a veteran myself and I can tell you I really appreciated having the USO around, and I took advantage of their opportunities when I could. In 1990 and 1991 I was able to stay in Garmish and Berchesgarten.  In 1997, I went on an USO organized tour of Budapest. If you have anything to add, please feel free to leave a comment.

**Founded on 4 FEB, by President Franklin Roosevelt. He asked several private organizations like the Salvation Army, YMCA, Catholic Community Service and others to come together and handled rec leave for the troops.

**USO stands for United Service Organization. It's slogan is: Until Everyone comes Home.

**It's not a government agency.

**Mission Statement of the USO: Lift the spirits of American troops and their families.

**Katy Perry and Idina Menzel are veteran USO performers. They also performed at the 2015 Superbowl.

Question: Has the USO touched your life?  What else would you like to know/learn about the USO?
Posted by Stephanie Burkhart at 1:30 AM