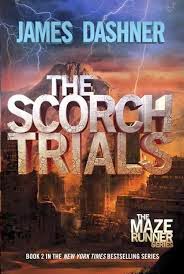 Dashner crafts a taut, nail-biting dystopian story with “The Scorch Trials.” Thomas and the Gladers are given a near impossible task: to cross “the scorch” in two weeks if they want the cure to the Flare, but is two weeks enough time?

Thomas and his friends barely have enough time to recover from their trials in the maze when they’re thrown into another problem – cross the scorch in two weeks. Thomas learns the maze was a test and there were two test groups. The second group was all female with only one boy – Aris. Whereas the maze was more of a physical trial, the scorch ups the ante by involving complex emotions. Thomas’ loyalty, resolve, friendship, courage, love, and frustration are driven to their limits. How much can a young man take before his mind snaps? Is a cure to the Flare worth the emotional scars crossing the scorch promises to leave?

Dashner’s writing is fast-paced and easy to read. There’s plenty of action and suspense. Dashner infuses just the right amount of characterization and pulse-pounding plot that keeps the reader turning pages. Thomas is a true leader. He faces adversity with a stiff chin. Theresa, as a character, is hard to get a feel for as she has a role to play as ‘the betrayer’, yet there are hints that she wholeheartedly believes she must do what she does.

“The Scorch Trials” is the second book in the series, but stands alone well, though reading the first book will flush out the arc of the storyline better for the reader. I highly recommend this book for readers 12 and older. “The Scorch Trials” is a quick, engrossing read. I didn’t want to put it down. It’s a worthy sequel to the series.
Posted by Stephanie Burkhart at 1:30 AM