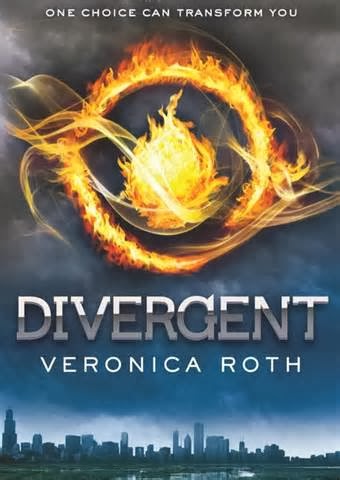 Roth pens a mesmerizing, heart-pounding novel with "Divergent." Set in the future, Beatrice "Tris" must choose a faction when she turns sixteen. The choice isn't easy. There are five factions that revolve around the following: honesty, peace, selflessness, fearlessness, and knowledge. If you show an aptitude for more than one faction are divergent.

Divergent is not what you want to be. Beatrice's futuristic society rejects the divergent. They are the unknown denominator. They put the world at risk with their unanticipated behavior. Beatrice chooses bravery and select Dauntless as her faction.

Being an initiate in Dauntless isn't what Tris expected. She's tested physically, mentally, and emotionally through the use of simulations developed by the Erudite, which are administered by serums. As Tris discovers Dauntless' divisions, can she find true bravery in herself to expose the truth?

Roth's writing is fast paced, daring the reader to keep up. She paints her futuristic society with just enough brushstrokes to envision Beatrice's world as dark and gloomy, leaving the reader to wonder what caused the world's fate and how long will it remain bleak?

Beatrice is a strong female character who drives the story. Four is mysterious and quiet, not sharing his confidences lightly. As the story progresses, the plot takes off at breakneck speed. Dare Beatrice reveal she is divergent to stop a deadly plot that will ruin two factions? "Divergent" will take you on a roller coaster thrill ride that will leave you breathless.

QUESTION: Have you read Divergent or the books in the series? What did you think? Are you looking forward to the movie?
Posted by Stephanie Burkhart at 1:30 AM