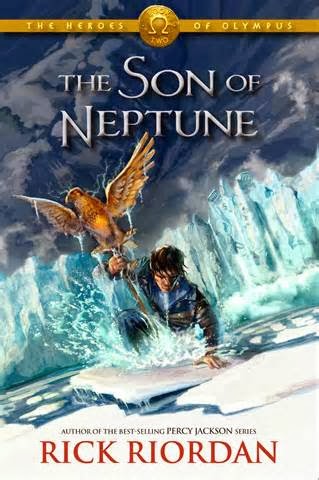 Percy Jackson is back with a taunt, suspenseful quest in "The Son of Neptune." Percy's lost his memory, but is guided to the Roman demigod city, "Camp Jupiter" where he meets Hazel and Frank. A demigod's work is never done, though. Percy and his friends are given a quest by Mars to free Thanatos (Death) from Gaea's giant, Alcyoneus. Against impossible odds can they succeed?

The novel opens with gorgons chasing Percy. While re realizes his memory is gone, he knows this – the gorgons are supposed to remain dead when he kills them. Weary to the bone, he finds Juno disguised as a "hippie" and manages to make it to the safety of Camp Jupiter with the help of his new friends, Hazel and Frank. The Romans accept Percy, and soon he's selected to go on a quest to Alaska with Hazel and Frank to free Death. (Thanatos)

Riordan's writing engages the senses. Quick and easy to read, Riordan layers his words with subtle clues and emotional nuances that are easy to miss if one reads to quickly. The plot moves at a brisk pace, keeping the reader flipping the pages. Tight and suspenseful, the story hints at secrets, which threaten to turn Percy's world upside-down.

Riordan's characters are interesting, filled with human faults, which make them relatable to younger readers. Percy is fearless, but out of his element. Hazel is brave, but doubts her choices. Frank is unsure, but faces his fears with true courage. What Riordan does well is bring the Greek and Roman myths into a modern world, giving them a unique story that is appealing to today's young adult audience.

"The Son of Neptune" engages all the senses. It will take your breath away and make your heart pound in your chest. The novel is geared for a young adult audience and I recommend it for readers ten and up.

Question for you: What do you think of the Percy Jackson movies?  Which one did you like better? Do you think the books capture the "flavor" of the books? Why or why not.