Book Review Friday - In For a Penny by Maggie Toussaint 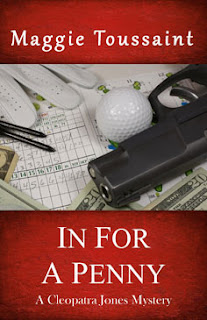 Toussaint pens a cozy "who-dunnit" mystery with "In For a Penny." When Cleopatra Jones finds her ex-husband's best friend, Dudley, dead as a doornail, on the golf course, she's 'in for a penny,' as the Hogan's Glen police investigate her friends and family as suspects.

Cleopatra (Cleo) Jones is an accountant in the small town of Hogan Glen. Everybody knows everybody. While playing golf with her best friend, she discovers Dudley's dead body. News travels fast and it seems everyone has a motive to do Dudley in. There's Cleo's best friend, Jonette, Cleo's ex-husband, Charles, Charlie's wife, Denise, Jasper the golf course maintenance guy, Jasper's mother, Cleo's neighbor, Ed, the mayor, and the shady real estate developer guy. The police start an official investigation, but Cleo's determined to find the murderer herself. As the danger gets closer to Cleo, will she find a killer or get killed herself?

"In For A Penny" has an endearing cast of characters. There's Cleo, the beleaguered, yet determined heroine, Mama, Cleo's exasperating mother, Jonette, Cleo's steadfast best, friend, Brit, the bossy cop, Dudley, who was no "doright," Charlie the cheater, and Rafe the golf pro hottie. Toussaint does an excellent job giving Hogan's Glen a life of it's own.

Toussaint builds the mystery slowly, but masterfully, up'ing the emotional involvement with each new angle Cleo investigates. The ending promises to keep the reader on the edge of their seat as Cleo returns to the scene of the murder to catch a killer. "In For A Penny," will have you smiling, fuming, biting your nails, and cheering for Cleo. Toussaint earns two enthusiastic thumbs up from this reader. I highly recommend this book.
Posted by Stephanie Burkhart at 6:00 AM

Email ThisBlogThis!Share to TwitterShare to FacebookShare to Pinterest
Labels: Book Review Friday, cozy mystery, In for a Penny, Maggie Toussaint