Silent Night is one of my favorite carols because it's mellow melody allows one to close their eyes and visualize the lyrics. For me, it's a Christmas card set to music.

As far as "traditional" carols, Silent Night is a more recent offering. The song was first played on Christmas Eve 1818 at the St. Nicholas Church in Oberndorf, a town on the Salzach River in Austria.

Father Joseph Mohr wrote the lyrics calling the song "Stille Nacht." Franz Xavier Gruber, an organist in a nearby town, composed the music. Rumor had it the organ at the St. Nicholas Church broke down, so Gruber composed a guitar accompaniment for the song.

A popular singing group at the time, the Strasser sisters sung the carol throughout northern Europe and performed it for the King of Prussia, King Fredrick William IV.

Another signing group, the Rainers, brought the song to American in 1863, the song was finally translated into England and is now a Christmas classic in the 21st Century.

Author Bio: Stephanie Burkhart is a 911 dispatcher for LAPD. She puts a nativity scene under her tree each year.

Question for you: Do you decorate your house outdoors with Christmas lights?

Twilight Over Moldavia
Book 2 in the Moldavian Moon Series 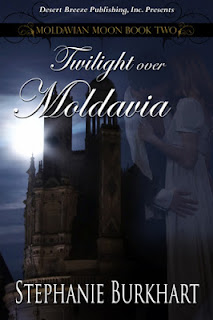 Blurb: Prince Stefan is cursed to become a werewolf. Does Caroline dare to fall in love with a beast?

Opening:
Caroline swung her leg over the saddle and dismounted from Selene, her horse. It had to be nearby, and she was determined to find it before the Sigmaringens arrived. Her ladies, Jane and Louise, slid out of their saddles as well. Bless them. They were troopers to put up with her whims.

Jane collected Selene's reins. "Your mother would banish you to the embroidery room for a week if she knew you were here."

"Well, if I have my way, she'll never know the details about this little adventure."

Caroline peered at Jane over her shoulder, then lifted her bow. It sported a twenty-pound string, and she was very accurate with it. A quiver of arrows rested securely over her back.

5 Stars, Long & Short Book Reviews
NOMINATED FOR BOOK OF THE MONTH, FEB 2012
Twilight Over Moldavia is even better than the first book in the series. It is an excellent story filled with just the right balance of romance, magic, and danger.