California Thursday - A Visit to the CA Science Ctr and Endeavour

This past Monday I had a chance to visit the California Science Center and the Space Shuttle Endeavour. I was very excited to see Endeavor, too. I remember as a young girl in the 1970's going to the library and reading every book they had about Space.  One of my most vivid memories is in 1981, sitting through my 7th grade Science class and watching on TV the Space Shuttle Columbia rocket into space for the first time. 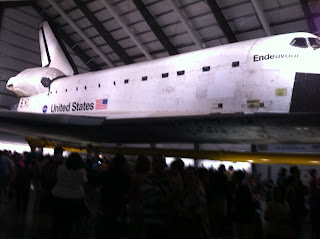 Here's a view of Endeavour as you first walk into the Pavalion.

Of course the Space Shuttle Challenger is forever etched in my memory. It was January 1986, Manchester, New Hampshire, and I was  a Senior in High School sitting in Math class waiting for the class to begin. My math teacher, Miss Mantineo was at the board, writing problems when the announcement came that the Challenger had blown up.  We lost Christa McAuffle that day, New Hampshire's hero, and first teacher in space. Even to this day, I'm easily overcome with tears when I think of it. 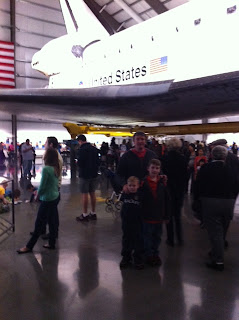 Brent and the Boys with Endeavour in the background.

I learned that Endeavour was one of the replacement shuttles after the Challenger blew up. A contest was held throughout America through the Elementary and Secondary schools to name the shuttle. Endeavour was chosen. Endeavour is spelled the British way, in honor of Cook's Endeavour that explored the Pacific Ocean.  There's a great picture in the Endeavour pavilion of President George H.W. Bush presenting the name plaque of Endeavour to the children of the winning schools. 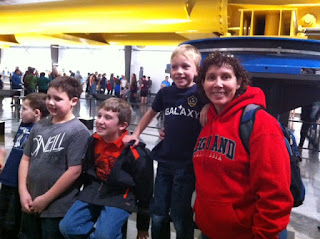 Me and Boys Underneath, near the "crawler." 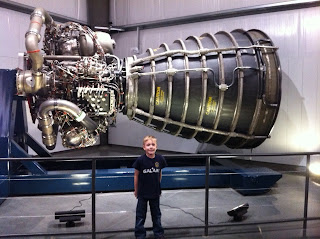 Joe next to one of the rockets. 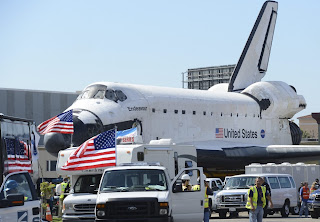 Endeavour as it travels down an LA Street, October 2012 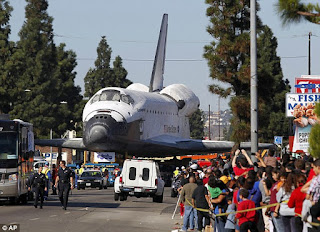 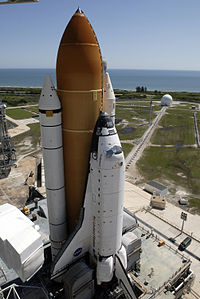 Endeavor on the Launch Pad

I also saw an IMAX 3D presentation called Hubble 3D where the space shuttle (I believe it was Atlantis) went up and fixed the Hubble in 2006. The Hubble has taken some great shots of the universe in space - one being a star nursery in the Constellation Orion's Belt. Gorgeous. If you are at the Science Ctr this is a great show to see.

I'd love to hear your thoughts on the space shuttles if you have a second.