Just Released! My steampunk romance: A Gentleman and a Rogue 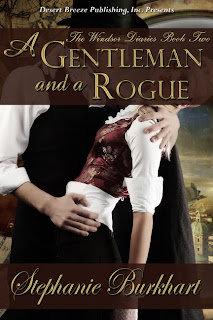 BOOK 2 of "The Windsor Diaries" - "A Gentleman and A Rogue" is now on sale! It's the 2nd steampunk novel in this romance series.

Now in Lincoln, Edmund is reunited with Lady Keira Russell, the love of his life, but if it isn't one obstacle, it's another. Keira does not want to fall in love with him again. Jonas Byron has taken up with Keira's father to build a windmill, and Edmund's brother, Richard, the Guardian of the Time Machine, has followed Edmund to ensure Queen Victoria makes the right decision when choosing the fuel of the future. Edmund has a choice - make mischief to ensure time marches to the beat of the right drummer, or trust in Keira and her belief that Queen Victoria will make the right decision on her own. Will Edmund lost Keira for good if he makes the wrong choice?


ENJOY THIS EXCERPT:
The song ended and Edmund grabbed her hand, tugging her toward the nearest hallway. At first, she wanted to protest; call out for her father and defy Edmund's wishes, but then reason kicked in. She wanted -- no, needed -- answers. And, she had plenty of questions.

Email ThisBlogThis!Share to TwitterShare to FacebookShare to Pinterest
Labels: A Gentleman and a Rogue, Steampunk romance, Stephanie Burkhart, The Windsor Diaries