Book Review for: Captured by the Highlander 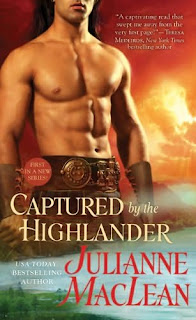 MacLean leaves you breathless with "Captured by the Highlander." Duncan MacLean has a ruthless reputation as the "Butcher of the Highlands," but when he kidnaps Lady Amelia Templeton, she tests him on so many levels and dares to ruin the Butcher's reputation.

Set in Scotland in 1716, the story opens with Duncan's suspenseful kidnap of Amelia. He's looking for her betrothed, Colonial Richard Bennett, who is known for his brutality towards the Scots. Initially, Duncan, as the Butcher, just wants revenge, but he can't deny he's attracted to Amelia. She's headstrong, believes in her convictions, and dares to defy him.

Amelia breaks away from Duncan and seeks refuge from a squad of English soldiers. Unfortunately, they're drunk and act poorly. Duncan saves Amelia, and the incident challenges her to understand his motivations.

Duncan takes Amelia to Montcriffe where she discovers his true identity. Dare she give in to the passion Duncan evokes knowing the danger he faces if his secret is revealed?

MacLean's writing is easy to read and plunges the reader in a suspense filled opening. The action is perfectly paced, allowing the reader to catch their breath before racing forward again.

MacLean paints wonderful pictures with words allowing the reader to vividly see Duncan and Amelia's word in their mind.

The most rewarding part is the characterization. Despite Duncan's ruthless reputation, his motivations are clear to the reader. As a reader, I easily lost my heart to him. Amelia is feisty, challenging, and when evidence presents itself, willing to give Duncan a chance.

The story is sophisticated for romance readers with love scenes that capture the passion and sensually of the couple. MacLean will leave you breathless, wanting more tales of the Scottish highlands. "Captured by the Highlander" is a wonderful romantic escape on a rainy Saturday afternoon. I highly recommend this book.