STEPH: Welcome to the football blog stop! Who's your favorite football team? How long have you been a fan?

JEANNE: I’m a huge Steelers fan! I became a fan back in 2001. Never watched football before that.

JEANNE: I’d say Hines Ward. I always love his smile. He’s a very versatile player and no matter how hard he’s hit it’s rare he doesn’t come up without a smile! I’m glad he won DWTS though I refuse to watch that show.

STEPH: Who's your favorite all time Steelers player? 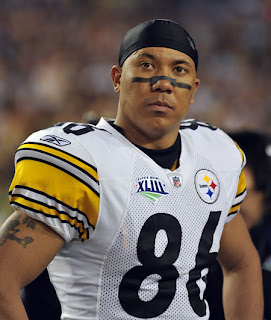 STEPH: Who's the Steeler's "evil" nemesis?

JEANNE: I’d have to say the Eagles. I know the Bengals and Browns are nemeses also being so close to Pittsburgh. But we HATE the Eagles. I won’t go into the reasons. ☺

JEANNE: Yes, I’ve been to quite a few games as well as Playoffs and a Championship game. All at Heinz Field. It’s usually COLD! I wear lots of layers. You can usually only see my eyes during the game since I’m so bundled up. Though the last game I was at it was warm and I was sweating. The fans are great and you really get caught up in the excitement of the crowd.

JEANNE: I own 3 jerseys and want to get a couple more (a Bradshaw and a Lambert jersey). My French bulldogs also have jerseys!

JEANNE: I never eat at the games. I always eat before or after. I usually hit Primanti Bros. for one of their famous sandwiches! 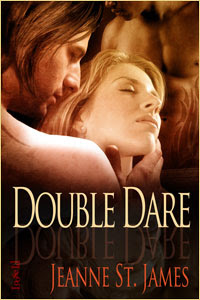 What could be better than waking up next to a hot guy? Waking up sandwiched between two of them.

Quinn Preston, a financial analyst, is not happy when her friends dare her to pick up a handsome stranger at a wedding reception. What better reason to give up men when her previous long-term relationship had not only been lackluster in the bedroom but he had cheated.

Logan Reed, a successful business owner, can’t believe that he’s attracted to the woman in the ugly, Pepto-Bismol colored bridesmaid dress. And to boot, she’s more than tipsy. After turning down her invitation for a one-night stand, he finds her in the parking lot too impaired to drive. He rescues her and takes her home. His home.

The next morning Quinn’s conservative life turns on its ear when Logan introduces her to pleasures she never even considered before. And to make things more complicated, Logan already has a lover…

Tyson White, ex-pro football player, is completely in love with Logan. He has mixed emotions when Logan brings home Quinn. But the dares keep coming and things heat up with the three of them. Nevertheless Ty wonders: will adding Quinn to the mix end up enhancing or destroying Logan’s and his relationship?

Excerpt:
Quinn Preston almost choked on her Alabama slammer when her friend elbowed her in the ribs. "Ooof."

She saved her drink before it could spill all over her ugly bridesmaid dress. Yeah, that would have been a shame: to ruin such a nice, frumpy, pukey pink taffeta dress. One the bride had said she would be able to wear in the future. Like to a cocktail party. Or maybe her own funeral. Yeah, right. No one in their right mind would want to get caught dead in this thing.

Ruining the dress wouldn't have been a loss, but losing her drink would have. She was drinking slammers for a reason -- to get good and drunk.

Lana nudged her again. "You see that?" She nodded her head toward the back of the room.

"What?" Quinn really didn't care what Lana was excited about. She just wanted to get this day over with. She was tired of watching the happy couple. She was tired of pasting on a plastic smile for the photographer. And she was really tired of listening to the sappy congratulations. All things she might never have -- the wedding, the husband, the bridal bliss. And something her parents never failed to remind her. Especially now that she was in her early thirties. And single. Again.