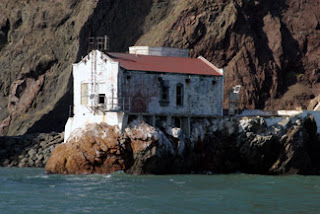 Lime Point, believe it or not, is under the Golden Gate Bridge. A rocky spur located on the northern side of the Golden Gate Bridge roughly extends 100 feet into the bay and is only 20 feet wide. Since San Francisco Bay is often engulfed in fog. An audible fog signal was built on Lime Point in 1883. The signal consisted of 2 12" steam whistles.

In November 1900, lens lanterns were added to the signal station officially making Lime Point a lighthouse. The lights hung on the wall only 19 feet above the water.

Two men were assigned to keep Lime Point running smoothly. A 3rd story was added for a 3rd Keeper.

In 1937, the Golden Gate Bridge was completed and built directly over Lime Point. Still, the fog was tricky despite the light and sound from the lighthouse. In June 1960, a freighter rammed into the station when it wandered off course. The station's repair bill? $7,500. The ship's? $60,000. 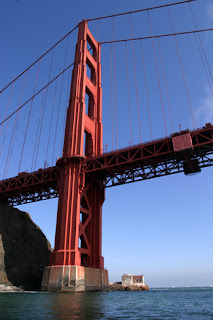 Just before Christmas 1959, the Coast Guardsmen manning the station were robbed. Hard to imagine since the signal house in on such a narrow path, but they got away. 18 months later the station was automated.

Now, the remains of the station are still there, abandoned and vandalized. The building mostly goes unnoticed by the tourists who can't help but admire the awe-inspiring bridge.