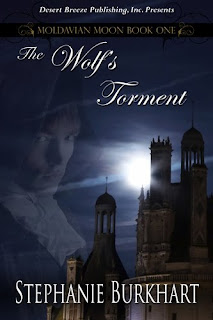 Note: This is an excerpt from my upcoming novel, "The Wolf's Torment" which will be released by Desert Breeze 1 MAY. It may vary upon publication.

The set up: In this scene, Theresa's father, wants to give Mihai "the son-in-law" talk - witch style.

Theresa stood and grinned at hearing her father's voice. He walked over, arms extended, and she ran into his burly embrace. He parted from her, gripping his hands on her upper arms. There was no mistaking thepride in his eyes. "You look wonderful."

"Papa! That must have been the fifth time you said that."

"Oh, let me be proud of my little girl. Now, when is your honeymoon?"

Theresa's father looked up from her and then at Mihai. "I must talk with your husband. You don't mind if I take him aside, do you?"

"You're not going to scold him, are you?"
A playful spark danced in her father's eyes. "No, I'm just going to threaten him. If he doesn't treat you right--"

Her father chuckled. Mihai gestured toward the door. "We can talk in the study."

"It will be fine, Theresa. I had the same talk with Victoria's husband."

"I'll keep you company," said Sonia. "I'm sure my father had the same talk with Viktor."

Mihai squeezed Theresa's hand and escorted her father outside of the ballroom. Edward and Victoria joined them. Theresa's father looked at him. "I asked them to join us." When he opened the door to his study, Mihai found Beatrice sitting in a chair, waiting for them. He didn't know if he should be worried, insulted or flattered. Why did Theresa's whole family have to be here?

"No, I want to get right to business."
Mihai gestured for him to take the couch. Theresa's father sat down. Edward and Victoria sat next to him. Beatrice stayed in her chair. Mihai grabbed a spare chair from a corner and joined the circle.

Theresa's father steepled his fingers. "I often wondered what happened to Esmeralda. She had such promise and her father was reckless with her future."

"You knew my mother?"

Mihai's heart leapt. What luck! His bride's father had known his mother, but of course, he would -- he was a witch. "What do you mean, her father was reckless?"

"He wanted revenge for a minor insult and promised Esmeralda into service to Hecuba and her coven. Esmeralda refused to go and disappeared. I learned years later through Count Brancoveanu that she married into Moldavia's royal house."

"Hecuba?" questioned Mihai. The witch who killed his mother!

Theresa's father looked at him, his expression serious. "Hecuba isn't your problem. The wolf in your house is."

"Viktor." Mihai drew in a breath. Viktor wasn't the same man he knew in London. Mihai's heart went out to his friend as he struggled with to hold onto his caring and kind nature.

"Beatrice told me what occurred and that you and your sister received lessons from her."

"She has been a good teacher."

"Good. You'll need to keep learning and practicing on your own. Beatrice must accompany us back to Austria. When I can, I'll spare her for a visit or two, but you must be diligent or the wolf will ruin your house."

"Viktor would do no such thing."

"Yes, he will. He is a wolf. He wants two things -- blood and sex. This feral need will consume his human body, and when it does, he will plot against you, purposely hurt you, and eventually try to kill you."

Theresa's father snapped to his feet. "You indignant boy! Do not presume to dictate to me how Viktor will behave. I know the wolf mentality and every man succumbs to the feral nature."

Mihai stood as well, unsure of how to react, but convinced the elder witch was very serious and he needed to be serious as well. "Tell me what to do."

"I sense reluctant acceptance coming from you, but you must not be reluctant to act when the time comes. Not only that, but the situation is complicated by Theresa's ignorance."

"Why did you raise her not to know her talents?" asked Mihai.

"I foresaw her future at birth and it dictated she must be ignorant of her heritage. If she ever practices witchcraft, she faces death."

"Death?" A wave of apprehension threaded through him. He'd wanted to explore witchcraft with her. What did her father mean?
Posted by Stephanie Burkhart at 6:00 AM